50% up to €250
PLUS 100 Free Spins on Gonzo's Quest. Minimum deposit: 20€. The maximum bet allowed whilst the welcome bonus is in play is 5€. Deposits made by Skrills and Neteller are not eligible.
cashable
35x(D+B)
CLAIM

25% up to €25
Every Wednesday, get a 25% Reload Bonus on your 1st deposit of the day! AND 25 Free Spins credited in 24 hours! Bonus amount up to 0.25 BTC, €25. Bets on Roulette and Baccarat do not count.
non cashable
Wagering Requirements

10%
Make a deposit on any Monday and casino will credit your account with a 10% Deposit Cashback Bonus if you happen to lose. Maximum Bonus of 0.1 BTC. Minimum deposit, loss and wager on the previous day: 0.001 BTC. Bets on Roulette and Baccarat do not count.
non cashable
3xB
CLAIM 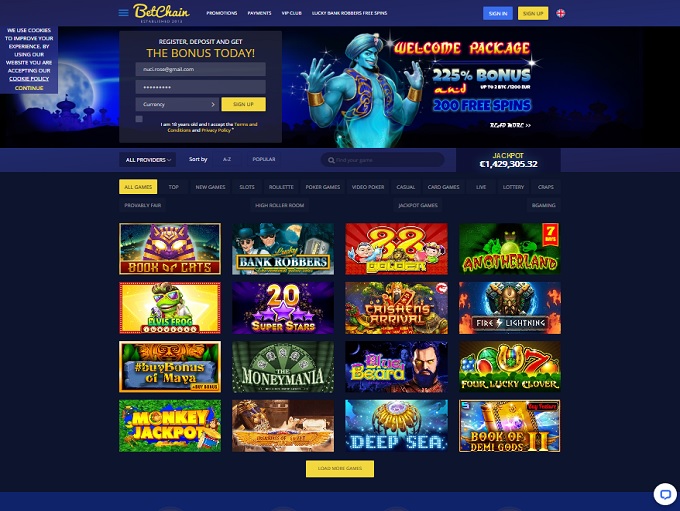 This site was originally established as a casino that only accepted the new digital currency, Bitcoins. All bets and all deposits were made in Bitcoins. However the casino has now changed its rules. You can now play and deposit using euros and US dollars as well as Bitcoins.

BetChain is a site licensed in Curacao. The casino supports ten languages, including English. In addition to Bitcoins and the Bitcoins Wallet, Cubits, BetChain has eight other ways to make a deposit. They include Visa, Master Card, Maestro, Paysafecard and Lava Pay. You can also use the web wallets Neteller and Skrill. The casino also accepts Puggle Pay.

BetChain has other generous promotions you can claim once you become a member. They include Free Spins Friday, which gives you 50 free spins every week. All you need to do to earn this benefit is make your first deposit and you’ll get the free spins every Friday.

Everyone who joins BetChain can also reap the benefits of the VIP Club. Just for joining the site, you’ll be entitled to such VIP rewards as higher loyalty bonuses, an increase in the conversion rate of your comp points and exclusive access to special promotions.

You’re sure to find whatever action you want at this online casino, BetChain uses the games of several leading software providers, including BetSoft and SoftSwiss. You’ll find dozens of slots, plus scratch cards, keno, bingo, arcade games and virtual sports. There are also table game such as baccarat, roulette, blackjack and Hi/Lo.

BetChain also has dozens and dozens of slots, including many from BetSoft that feature brilliant 3D graphics. Among these slots are such popular games as At the Copa, Billyonaire, Gypsy Rose and Greedy Goblins.

BetChain also has more than a dozen variations of video poker. Their choices include the most popular games, such as Jacks or Better, Deuces Wild and Joker Poker. There are also some unusual versions, including Wild Texas, Multi Win and Split Way Royal.

Currenty there are no reviews for Betchain. Be the first one who will review it.

Betchain Casino supports banking methods for deposits and withdrawals for