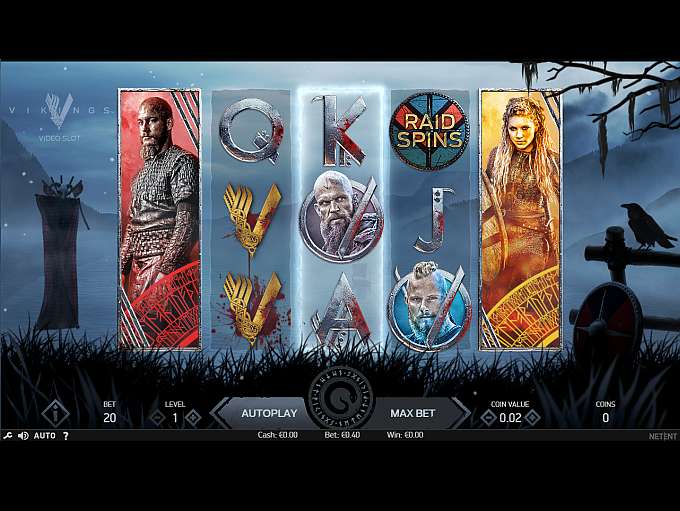 Vikings is arguably one of the most eagerly anticipated slot machine games of all time. Based on the hit History Channel series of the same name, it tells the tale of Ragnar Lodbrok, shieldmaiden Lagertha, their son Björn Ironside and friend, Floki the boatbuilder. Vikings features NetEnt’s Bet Ways gaming engine, which is another way of saying that this is a 243 ways to win slot. Wagers, therefore, don’t necessarily add up mathematically to the number of lines you play with. Players will find that they are going to end up staking anything from a floor of 0.20 per spin up to a ceiling of 100.00 a spin on this game. Filling the reels with Ragnar, Lagertha, Björn or Floki symbols will dish out wins worth as much as 200,000 coins in this much-loved slot.

Vikings doesn’t contain wild symbols, but truth be told, it doesn’t really need them. Instead, the slot features Raid Spins symbols and Hotspots.

In the base game, the third reel is known as a Hotspot Reel. Covering that reel will be a Hotspot, and if a Viking character lands fully stacked in that spot, all other instances of Viking symbols on the reels will transform into the same symbol, promoting big wins.

A Shield Wall feature also pops up in this game’s main feature and the base game. This randomly triggered bonus will hear Lagertha cry “shield wall”, and can see shields cover various symbols on the reels. These are mystery symbols and will then transform into the same icon.

Raid Spin symbols appear as shields, too, although slightly more adorned ones. They can show up on the third, fourth and fifth reels of the slot. Landing them on all three at once will trigger the Raid Spins bonus, which is the main feature in this slot game.

During the Raid Spins bonus, players will note that the reels transform into a 7-reel, 78,125 ways to win structure. The Hotspots now cover the third, fourth and fifth reels of this expanded reel set. Now, players have an even greater chance of landing wins when one of the Viking characters lands in a hotspot, and again, all other Viking character symbols will turn into the same symbol which appears stacked in a Hotspot. With more ways to win, the chances of bagging a top prize are near epic with this feature.

Currenty there are no reviews for Vikings. Be the first one who will review it.

Blueprint Unravels the Mysteries of Egypt in Scribes of Thebes

Playson Brings Back the Classics with Fruit Xtreme Slot Release