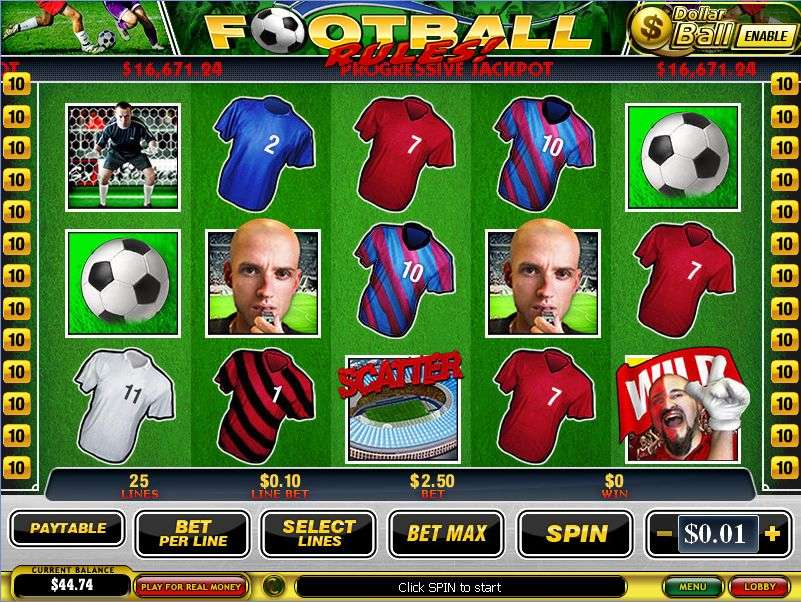 Playtech have developed a number of Football themed video slots, and Football Rules is one of their better releases. This game contains some fairly realistic imagery, even if the gameplay is now a little dated. You’ll find that Football Rules features a total of 5 reels and 25 paylines for you to bet on. Coin denominations can range from 0.01 up to 2.00 at the most, whilst players will also be able to bet anything from 1 coin up to 10 coins per line. Football Rules is flexible with its bets, with floor and ceiling limits fixed at 0.01 per line per spin, and 500.00 per spin, respectively. The slot also features a non-progressive jackpot worth a total of 10,000 coins.

Because of its age, this slot also features Playtech’s Dollar Ball progressive jackpot. This isn’t really worth your time, since you will have to place a side-bet to use it. If you’re interested, though, you have to match the number on the dollar ball draw with those given to you. It is best to avoid it.

Football Rules real special features begin with a substitute icon. This icon acts as a wild, and can replace all other symbols in the game, barring scatter and bonus icons. It is also the best paying symbol in the game, coughing up to 10,000 coins if you line up 5 in a winning combination.

Meanwhile the scatter icon is in the shape of a stadium. When stadium scatters appear 3, 4 or 5 times in any position on the reels, the player will bag scattered wins of 5x, 10x or 50x their total bet.

A happy World Cup Winner acts as the slot’s bonus icon. Bonus icons can only appear on the first and fifth reels, but if they appear on both at the same time then you will trigger the Football Rules bonus round.

In this bonus round, the player is met with a goal filled with balls. The player must choose from the options presented on screen to win a specific number of free spins. They will then get to choose a side to shoot a penalty at, which will in turn decide the multiplier which will applied to those free spins. After doing so, the free spins game begins, and players can start spinning and potentially winning for free.

Currenty there are no reviews for Football Rules Slot. Be the first one who will review it.