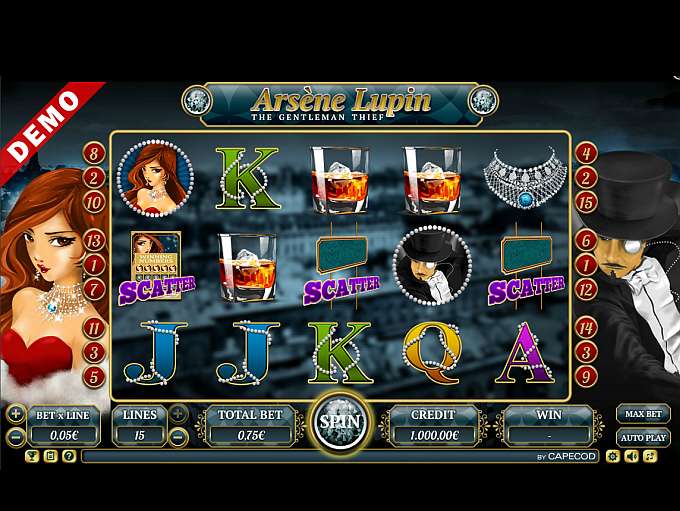 Arsenio Lupin slot brings you into the world of a fictional character of many talents. His aptitude for crime is best described in three words: master of disguise. He also goes by the name “gentleman thief”. But don't worry about him ripping you off as his focus is more on more deadly criminals than himself.

The fictional character created by French Writer Maurice Leblanc in 1905 is the inspiration behind this slot from Capecod Gaming. The slot game is designed with five reels and features three rows with fifteen pay lines.

The game can be played from as little as $0.01 up to $15 and is also available on multiple devices such as mobile, tablet and desktop systems.

The game features a finely designed reelset that comprises the “gentleman thief” on the one hand and a beautiful maiden on the other. The reels are designed to give off the feeling of wealth, grandeur and opulence. A model that aligns with its theme. As you can probably guess, the symbols you will be spinning on the reels also align with this theme.

Other symbols found in the game include those of playing card symbols of A, K, Q, and J. Of the low value symbols, that of A is the most valuable, rewarding you with up to 150 times the value of your stake for landing a matching combination of five.

One of the exciting features of the game is the fact that it comes with two wilds. One is the usual wild (joker) which can replace other regular symbols to form winning combinations in the game. The other is an expanding wild which (as the name suggests) expands to cover the entire reel it occupies, which helps you form winning combinations better.

But not only does the game feature two wilds, it also features two scatters. One is the poster scatter which is the key to unlocking the bonus round of the game while the other is the scratch scatter which will help you trigger the scratch card bonus game.

But that’s not all. The game also includes another bonus feature known as the Safe Game. This feature is activated when you land five scatters regardless of whether they are poster or scratch scatters. After the Safe Game is activated, you will be given five attempts to choose a safe. You will be rewarded if the safe contains a ring or a necklace.

Currenty there are no reviews for Arsenio Lupin. Be the first one who will review it.