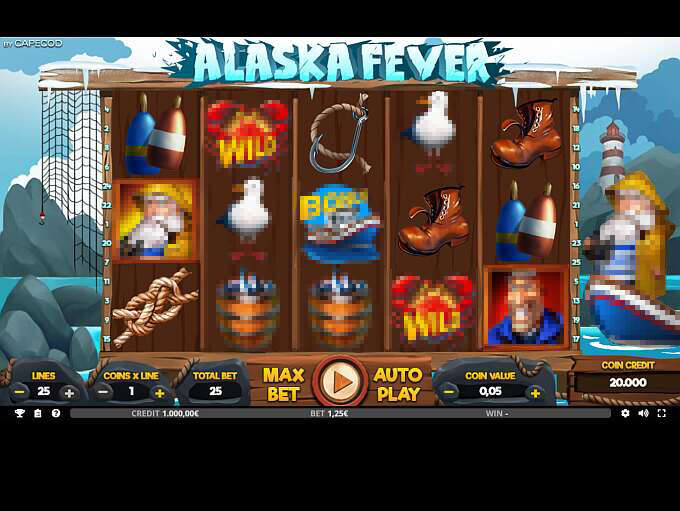 Alaska Fever is a slot game inspired by a fishing theme. The game is developed by Cape Cod and comes with a 5 by 3 setup with 25 paylines. Some of the features found in the game includes wild and scatter symbols as well as free spins and a bonus game. The game also features a betting range that will appeal to gamblers of all kinds. The wagering limit starts from as low as $0.01 and goes up to $25.

The fishing themed slot can be played on multiple devices cutting across mobile, tablet, and desktop systems.

Alaska Fever features an appealing interface with a slight cartoonish feel. Some of the symbols you will be spinning on the reels include ropes and hooks, seagulls, barrels and worn boots, as well as male and female characters. You will need to land a matching combination of symbols on the reels to win a reward in the game.

The symbol of seagulls will reward you with 200x the value of the line stake for a matching combination of five.

The game also features bonus symbols such as wild and scatter symbols as well as a non paying bonus symbols. The wild cards of the game are represented by the crab and the swordfish. The symbols can replace other regular symbols to form winning combinations in the game as well as act as paying symbols rewarding you as much as 500x the value of the line stake for landing a matching combination of five.

The scatter of the game is represented by the symbol of the lighthouse and is the key to activating the free spins round of the game. The game also includes non paying bonus symbols such as those of boats and nets.

You will need to land at least a trio of scatters on the reels to unlock the bonus feature of the game. Depending on the number of scatters that activated the round, you will be rewarded with anywhere from five to twenty three free spins.

If you are lucky to land some fishing nets, you will be rewarded with up to ten magic spins which instigate wins worth 3x the value of your stake.

Currenty there are no reviews for Alaska Fever. Be the first one who will review it.