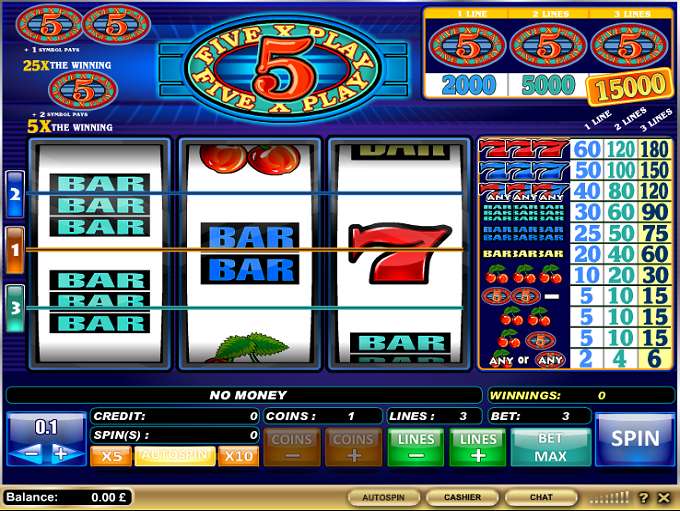 This game from iSoftbet is very similar to another game from the same company called “10x Play.” 5x Play does not offer as big a jackpot, but there are still plenty of coins to win and better overall returns.

5x Play is also similar to the old time slot machines known as “One-Armed Bandit Fruit Machines.” The game has just three reels with no Wilds, no Scatter symbols and no multipliers. However, there are three lines instead of the usual one.

Even though 5x is an old-fashioned style of slot, it still offers a chance to get a big payoff. You can win as much as 30,000.00 at one time even though the maximum bet on one spin is just 6.00.

Most of the symbols in 5x Play are ones that have been seen on slot machines for many decades. There are the Cherries, the Single, Double and Triple Bars and the Red and Green Magic 7's. The extra symbol in this game is the 5x Logo.

As in most classic slots, the Cherries are the lowest paying symbols and the easiest to get. Just one will return double your bet. But in this game, one of the 5x Logos will pay the same and if you get both a Cherry and a 5x on one line, you'll get back five coins for each one you bet.

The return on the 5x Logos is more than 30 times greater than any of the other symbols. If you get three of them on a pay line, you'll win 2,000 if you bet one coin and 5,000 if you bet two. The biggest possible payoff in 5x Slots comes if you bet three coins when the three Logos come up. You''ll collect 15,000 coins.

In addition to the jackpot payoffs, the 5x Logos have other special rewards. If you get one Logo on a line with two other matching symbols, you'll win 5x your bet. If you get two 5x symbols on one line with any other symbol, you'll receive a 25x payoff.