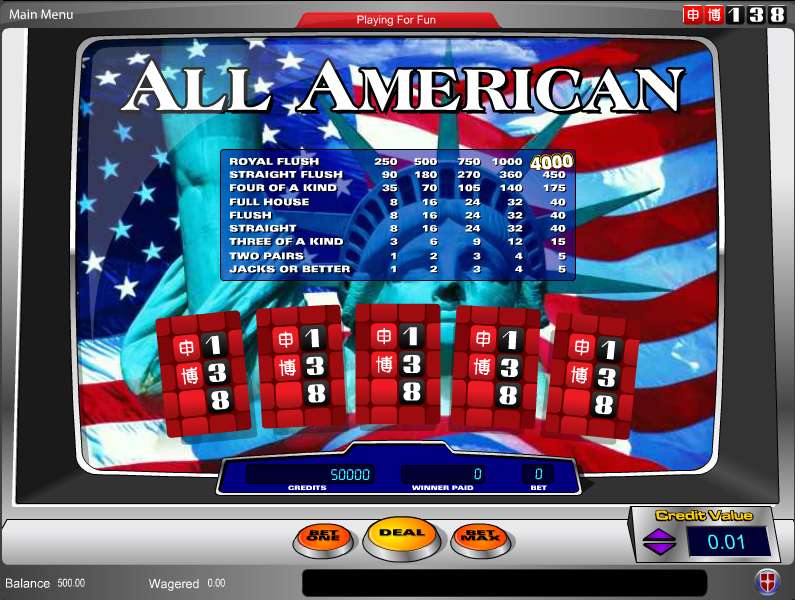 About All American Video Poker

We have previously reviewed versions of Amaya Video poker, and in this incarnation we can honestly say that the apple does not fall far from the tree. Amaya has taken this popular game, and dropped it into a TV screen, much like the games that were played in live casinos when it was first invented.  Amaya is a USA based company that has a great reputation in the industry, and from this alone we are guaranteed to be able to enjoy a fair and entertaining playing experience.

Video Poker is a classic, and traditional video game – fans don’t want to see much change. So, there are no fancy bells and whistles as such, it’s “special-ness” (if there is such a word), lies in the fact that it is retro, and just the way things used to be. Retro is the new black after all! A TV screen set into a back-drop of the Statue of Liberty, and American Flag, makes it as “American” as apple pie.

Credit values (coin range) may be set by the player according to their gaming budget, or the risk they are willing to take. These range from 0.01 up to 5.00, and the maximum wager players can make is 5.00. Land a Royal Flush when playing with five coins and the top prize of 4000 coins could be all yours.

There are not many bells or whistles on this version of video poker, apart from being able to choose coin size, there is not much else going on. It is the perfect choice for beginner players, because of its simplicity, and it offers an automatic “hold” feature. This means the machine will automatically hold cards that are at the best advantage to the player for a win.  However, players’ are also able to un-hold these cards and make their own choices.

There are no bonus games included in this Amaya version of All America. Generally speaking we at least find a gamble feature, where we can double winnings or lose it all, and in some instances also a Hi – Lo game. But not this time. Nevertheless it does not mean that the game should be overlooked, as sometimes these sort of features just prove to be too tempting, and often lose us more than we win. We usually advise players only to take a chance on these additional games when they have won small amounts.

Currenty there are no reviews for All American. Be the first one who will review it.