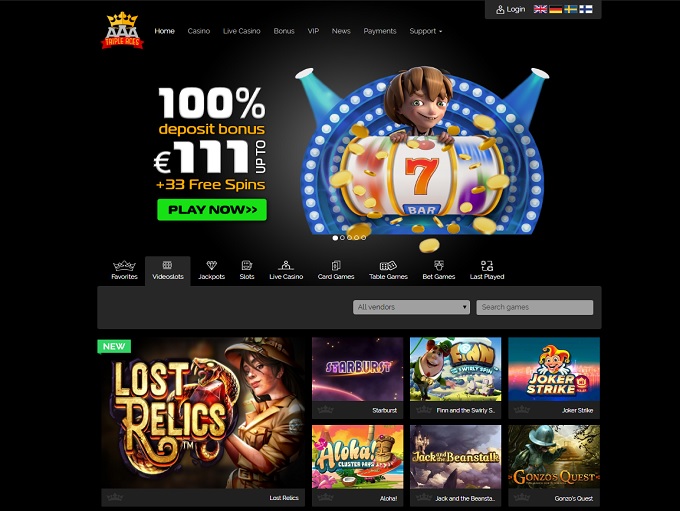 Triple Aces is a fitting name for an online casino, especially one which offers a more than reasonable selection of table games to its fans. Triple Aces can only be played in English, although nothing is baffling about that given that this casino – which launched in 2016 – focuses on English speaking players in Europe. The casino is licensed out of Malta and offers both instant play and mobile casino gaming.

VISA, bank transfers, MasterCard, Skrill, Paysafecard, Neteller, EcoPayz, AstroPay, Sofort, and Klarna, are all accepted as valid banking options at Triple Aces. The casino is known for its ability to offer quality customer support, too, either via live chat or their built-in contact form. Players can opt to seek out their own answers via FAQ if they prefer, though.

When a newbie registers for the very first time at Triple Aces Casino, they will be entitled to claim a 100% match deposit bonus. It is one that can see players able to pocket up to £111 in all, and pocket 33 free spins valid on Aloha: Cluster Pays, Joker Pro, Finn and the Swirly Spin or Hooks Heroes.

After pocketing that welcome bonus offer, players may wish to start looking at other offers. These include weekly reload bonuses worth up to 50% matches and valid up to £200 a pop, regular free spin offers, and exclusive monthly deals which can see players pocket anything and everything, from cash to spins and beyond.

Triple Aces primarily features software from Scandinavian online casino software powerhouse, Net Entertainment. They aren’t alone in offering games to players at this mobile and instant play casino, though. The casino also provides titles from other major developers, some of which include NextGen Gaming, Microgaming, iSoftBet, and Play ‘n Go, Scientific Games and others.

As mentioned, there is a more than decent range of card and table games at this casino, honouring its title. Numerous blackjack variants, copious numbers of roulette games, a wealth of video poker titles, and an ample supply of table poker games such as Texas Hold’em poker can be played there. Live dealer casino games are also supported at Triple Aces.

If online slots are your cup of tea, why not try your hand at some of their major slot machines? Those games include Joker Strike, Legend of Loki, Easter Island, Jokerizer, Jumbo Joker, Mr Vegas, Ozwin’s Jackpots, and more.

Currenty there are no reviews for Triple Aces. Be the first one who will review it.