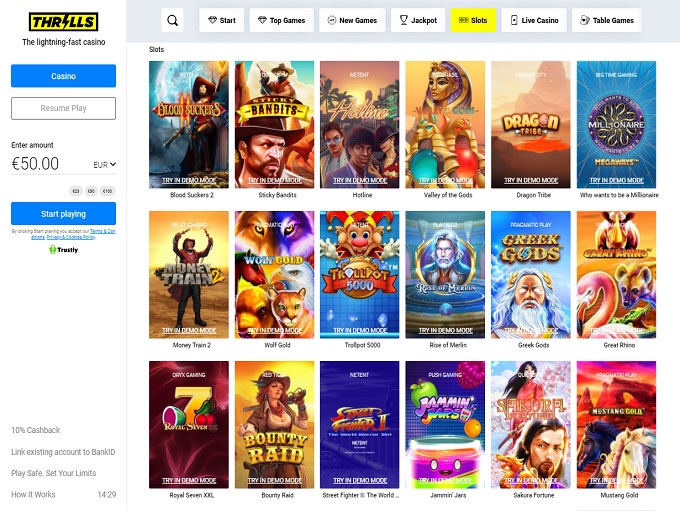 This is a gaming site which promotes itself as being in the exciting tradition of extreme sports. As they say at their web site, “Thrills understands if you do not dare to take risks, you do not have access to the largest gains.” They continue, “Extreme sports participants put their lives on the line. Thrills Casino works in the same way, but you don’t have to risk your life. By putting your money on the line, you can win huge amounts which may reach up to tens of millions of euros.

Thrills Casino is aimed in particular at the people of Scandinavia, though they also accept players from most areas of the world. However, their game controls are only operated in four languages-English, Swedish, Finnish and Norwegian. There are also only five currencies that are accepted-the euro, British pound sterling, US dollars, Norwegian Kroner and Swedish Kronor.

Thrills Casino has a rather limited list of rewards and bonuses that they provide their members. They do give out a decent Welcome bonus to new members and it includes a high number of free spins on one of their slot machines. However, they don’t yet offer any type of Loyalty programme.

Thrills is a large casino, with more than 400 games to choose from. They utilize nine different software companies to create their games. The list of developers includes Playtech, Microgaming, NetEnt, NYX Gaming and Quickspin.

Whatever type of online slot machine you’re seeking, you’ll find it in the Thrills Casino. With over 400 slots to choose from, Thrills has virtually every famous and currently popular game. You can play The Dark Knight, The Dark Knight Rises, Tomb Raider-Secret of the Sword, Battlestar Galactica and Starburst.

Thrills Casino also has a seemingly unlimited list of progressive jackpot games you can play. These include Major Millions, Mega Moolah, Jackpot Jester and Gold Rush.

With so many choices, you’ll also have no trouble finding a game if you’re looking for something new. You’re likely to find hundred of slots you’ve never played before or even heard of. You may have played Girls With Guns or the sequel Girls With Guns-Jungle Heat. But maybe you’d like to try Gunslinger, a Play’n Go slot that has a progressive jackpot. You also may have tried Terminator 2, but Thrills also has the Microgaming slot, Germinator. It offers a lucrative bonus round and a chance to win a big multiplier.

Currenty there are no reviews for Thrills Casino. Be the first one who will review it.