THIS IS VEGAS CASINO

100 Casino Spins
New customers only. T&C apply. 18+. This offer is not available for players residing in Ontario. New Customer Offer. T&C’s Apply. 19+. US OK! Amount: 100 free spins on Hail Caesar. How to claim the bonus: Players need to sign up through our LINK,  and the free spins will be credited automatically. WR: 100xb. Max cashout: $100. Restricted countries from this bonus: Belarus, Ontario (CA). Restricted games: No. Game contribution to the wagering requirements: All games - 100%. Max bet for the bonus: No. Cashable bonus: Yes. Sticky Bonus: Yes. Min deposit needed in order to cashout winnings: $25. Is the offer available on download &/or instant play version: Instant Play. Exclusive promo expires: 31st December 2023.

cashable and no deposit 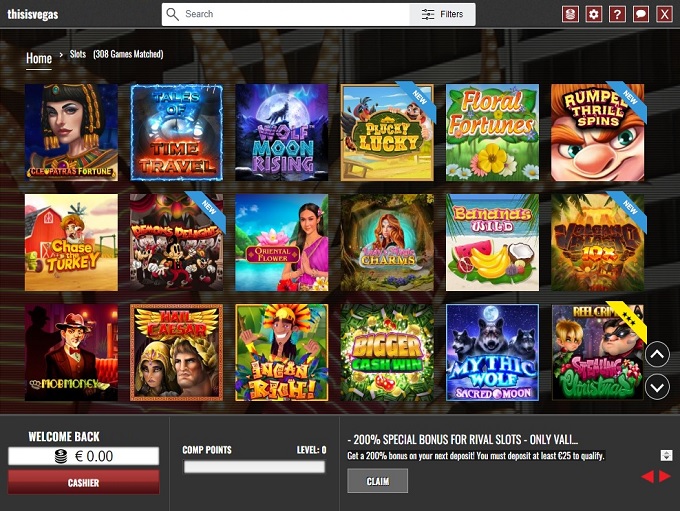 This Is Vegas Casino Review

Despite its name, you won’t, of course, be in Vegas when you play in this casino-in fact, you’re not allowed to join this site if you’re in America. But for the people of most of the rest of the world, you will at least find the games from Vegas at this site, along with several extra perks.

The promotions and benefits offered by This Is Vegas begin with their big Welcome offer. It rewards you for your first three deposits. You’ll get a 100% match for your first and second deposits. Both can get you as much as €1,000. Your third deposit can be worth as much as €400 while giving you 200% of your deposit.

Once you're a member, This Is Vegas always has a reload bonus available. “We never want our players to be playing with just the money they deposit,” the casino says on their website. That’s why they offer a 50% reload bonus, which, as the casino declares, is available “24/7 and as many times as you want every day.”

This Is Vegas also has a VIP program that is for all members. “We feel that all our players are important,” the casino says. “We have developed a system in which players gain increasing levels at the casino and unlock special features as early as their first deposit.”

Games at This Is Vegas

This site uses the software of Rival Gaming to fill their casino. This Is Vegas has all of the most popular table games as well as several video poker games and several Scratch Cards. The casino also has several versions of both keno and bingo.

Slots are the most popular games in this casino, including Rival’s exciting new development, “i-Slots.” The casino has 20 of those games, including three versions of “As The Reels Turn.” Among the other colourful i-Slots you can also play are “Baby Boomers Cash Cruise,” “Sherwood Forest Fortunes” and “Wild Safari.”

This Is Vegas has more than i-Slots. They also have more than a dozen 3-reel games you can play as well as 20 video slots that each have 5 reels.

Currenty there are no reviews for This Is Vegas Casino. Be the first one who will review it.

This Is Vegas Casino Casino accepts the following currencies: