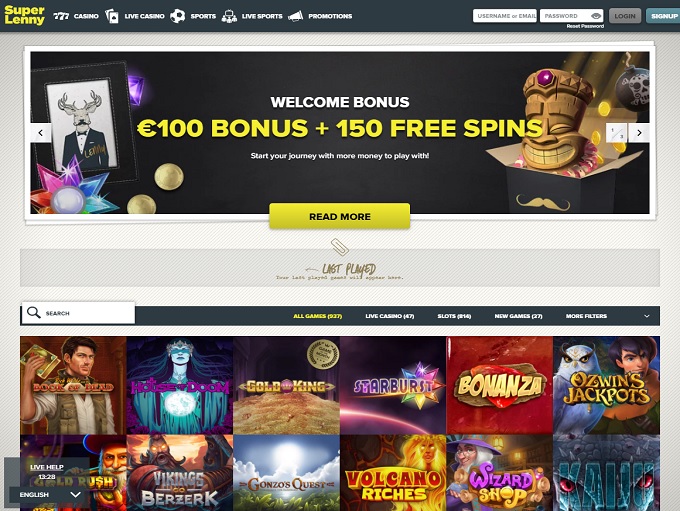 This site is aimed at gamblers from the Scandinavian countries. Besides English and German, the languages supported by the casino are Finnish, Swedish and Norwegian. The currencies accepted include the usual choices of US dollars, British pounds and euros, but also include the Norwegian Kroner and the Swedish Krona.

The namesake of this casino is a little hard to describe. The picture of him on the home page will remind you of characters from mythology, since he has the body of a human but the head of a deer, complete with antlers. “SuperLenny is the man in the know,” is how the website describes him. “You hang with SuperLenny and you will be guaranteed a ride. If he’s not bringing joy to your life, he’ll do what he can to help you.”

SuperLenny also holds monthly races in their casino which award big prizes to their members. These include trips to some of the most desired vacation spots in the world. The casino designates one of their slot machines for each of their contests. The player who plays the most money on that slot during the month will win the prize.

There are not many games at this casino, just 69 in total. 65 of them are slots. The other four are all table games and not necessarily the ones you expect. They do have one version of blackjack, but their other table games are the lesser known “Odd One In,” “Sharp Shooter” and “Six Shooter.”

Apparently, SuperLenny has been expanding their casino dramatically, since more than half of their games are listed under the “New Games” category. Even more are offered under another special category, “Lenny Recommends.”

Currenty there are no reviews for SuperLenny. Be the first one who will review it.

SuperLenny Casino supports banking methods for deposits and withdrawals for