Ridika Casino has a warning, we advise you play at another casino. 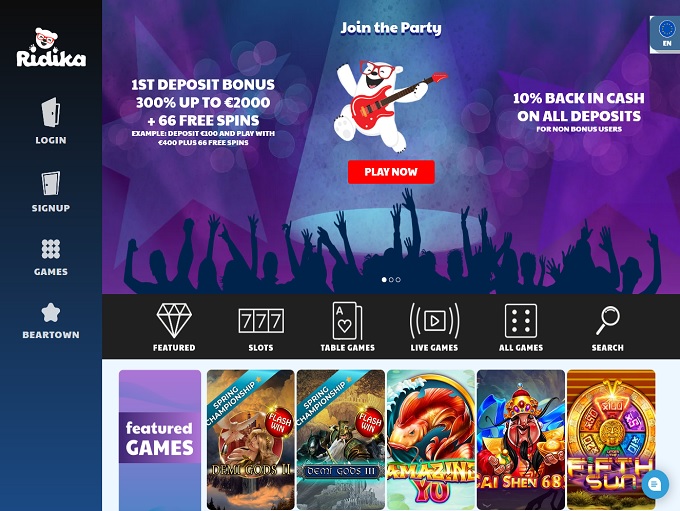 Ridika Casino certainly looks like an impressive, multilingual online casino. However, underneath their cool and stylish interface are a few underlying problems which may keep players from trying their hand at the site.

One of the main issues is their licensing information. The casino is licensed out of Curacao, but they used to hold a Maltese gambling license. When the first problems with the domain began to surface, they switched licenses to a Curacao one. Support has been shown to be somewhat muddled. Some players receive a response, and others do not. The online is known to accept deposit methods which include EcoPayz, Entropay, Maestro, MasterCard, Neteller, Skrill, VISA Electron, VISA, Sofort, and Cashlib.

The bonuses the casino carries certainly look good. Players can claim a 300% match worth up to €2,000 as well as 66 free spins on top slots at the site. However, it is known that these are sticky bonuses, which means that they cannot be withdrawn and nor can anything you win. The wagering requirements on the bonus are not exactly unfair, though, at 30x the bonus amount.

Ordinarily, we would expect to find rather sketchy terms and conditions with a blacklisted casino. However, it is not the bonus situation which is really the problem with this casino. Instead, it is their licensing information, their lack of support and their range of games, which we will come to now.

Net Entertainment games are listed at Ridika Casino, but they really shouldn’t be. The main reason for that is that the online casino is known to feature pirated games from the Scandinavian online casino software provider. Few players are going to want to try their luck at pirated NetEnt games, so, what can Ridika Casino offer you if you are brave enough to play there? They carry titles from a few different providers, and the general genres you can choose from include featured, slots, table, and live games at the site.

Ignoring NetEnt games (which as we’ve mentioned, are pirated) the casino offers up Rich Wilde Book of Dead, Dracula’s Family, Sugar Pop 2: Double Dipped, Viking Gods: Thor & Loki and all manner of other BetSoft Gaming slots at their casino.

Again, this casino is known to switch its licenses around, and to feature pirated games as well as lacklustre support. Until these issues are cleared up, we’d stay well away from Ridika Casino.

Currenty there are no reviews for Ridika Casino. Be the first one who will review it.