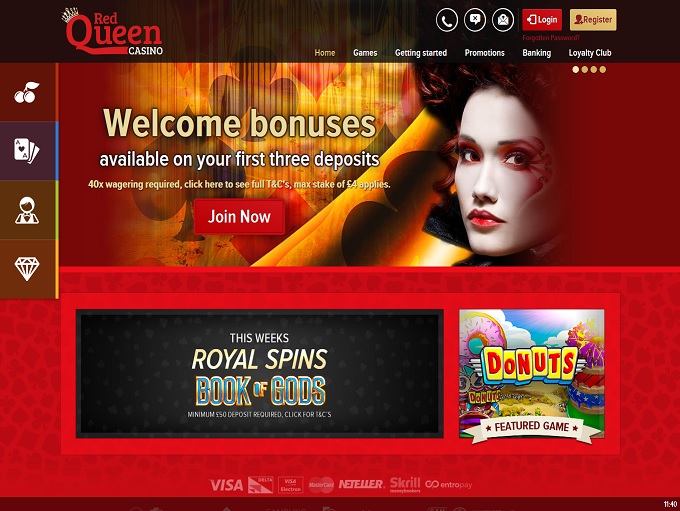 There are a number of online casinos that are aimed at the players of Britain, but this is one of the few sites which is actually licensed in that jurisdiction and not in some tax haven. “We have decided to take the burden of taxes,” the casino says, “in exchange for the merits of holding a UK gambling license.”

Red Queen has plenty to offer you if you join their casino. They will give you a No Deposit bonus of £10.00 just for signing up. There is a lot more bonus money available when you fund your account. For your first three deposits, you can get as much as £600.00.

If your first deposit is worth at least £10.00, Red Queen Casino will also give you 500 free points as part of their Loyalty Club. In keeping with the casino’s royal theme, the five tiers of the Loyalty Club are known as Sir/Dame, Earl/Countess, Prince/Princess, Duke/Duchess and the top tier, which, naturally, is known as King/Queen and is by invitation only. Players who reach that top level can receive as much as £7,500.00 a month in bonuses.

Perhaps the most interesting feature of Red Queen Casino is their selection of games. The casino points out that many of them are “original and made exclusively for Red Queen.” The casino’s games are made by several software developers. Some of them, including Cryptologic and NextGen, are well known, but others, including 1X2 Gaming and Elk, are not found at many other online casinos.

Among the many slot games that you can play at Red Queen are such familiar titles as Esquelito Explosivo. Medusa and 1429 Uncharted Seas. Much less familiar are the 1X2 games, Celebrity Jungle, Gingerbread Joy and Charming Lady Luck.

Red Queen’s casino also has all of the traditional games, including four versions of roulette, three of blackjack and three video poker games. There is also a large selection of virtual sports games, including Virtual Rugby, Virtual African Cup and Virtual Euro Legends.

Currenty there are no reviews for Red Queen Casino. Be the first one who will review it.