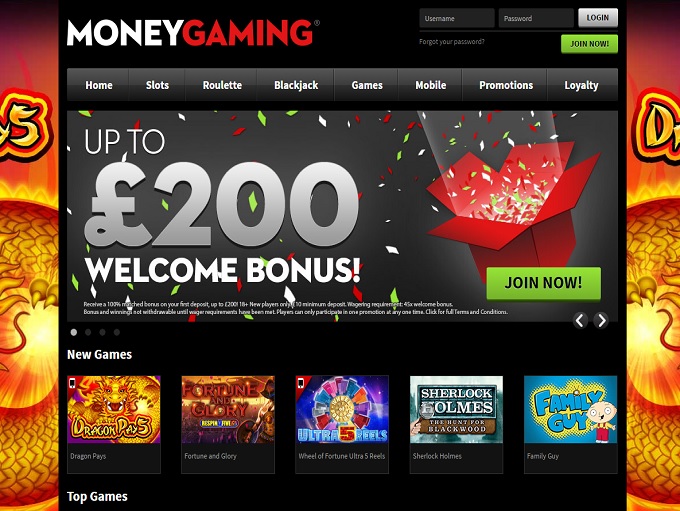 The casino’s name lets you know what it’s about. It doesn’t offer a lot of frills or fancy images. It just offers you lots of games as well as everything else you expect from an online gaming site.

When you become a new member of the casino. you’ll be able to claim MoneyGaming’s Welcome package, which can put hundreds of extra chips into your account. The casino gives you a bonus when you make your first three deposits. They also offer you cash back on any money you lose on one of their slot machines.

Once you start playing in the casino, you can become a part of MoneyGaming’s VIP Club. You’ll have an opportunity to make exclusive VIP deposits which will be rewarded with bonus money that is bigger than the bonuses offered to non-VIP members. That extra money is in addition to all of the other VIP benefits you’ll receive, including exclusive offers and personalized gifts.

There are seven languages supported in the MoneyGaming Casino and three currencies that are accepted. You can use euros, British pounds or US dollars. You also have more than a half dozen ways to fund your account, including such familiar choices as Visa, Master Card, Neteller and Skrill.

There are more than 300 games you can play in this casino. They utilize the software of several manufacturers, including Aristocrat and IGT. Some of the action at MoneyGaming is also the creation of  proprietary software.

Money Gaming has a number of slot games that feature famous figures or modern celebrities. Two of their most entertaining games are the IGT creations, “Elvis The King” and “Elvis-A Little More Action.” Both of those games not only offer lucrative bonus rounds, but they will remind you of an old jukebox in the way that they play a number of songs sung by Elvis himself.

The casino also has three slot variations of the popular game “Dungeons and Dragons,” also brought to you by IGT. The games are called “Fortress of Fortunes,” “Crystal Caverns” and the most recent creation, “Treasures of Icewind Dale.”

MoneyGaming also offers two IGT slots that are based on the popular Transformers movies. One is called “Ultimate Payback.” The more recently created game  is “Battle For Cybertron.” Both offer 5 reels with Wild Symbols and the chance for a big payoff in a bonus round.