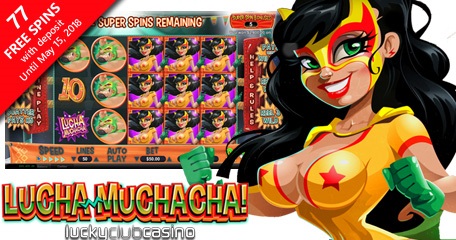 If you’ve got a taste for something new, we’ve got a fresh title from Nuworks to share with you. It’s called Lucha Muchacha, and it comes equipped with just the right dose of Latin flair in time for Cinco de Mayo (May 5th), an annual celebration created to acknowledge the Mexican army’s victory over the French Empire back in 1862.

The slot sets an unlikely character as its main mascot, a fiery female wrestler. Similar in theme to the popular game, Lucha Libre from Real Time Gaming, players will be given the chance to score a few knockouts! The slot is currently live for real money play at Curacao-licensed online casino, Lucky Club, which has unveiled an enticing introductory bonus valid through May 15th. Double your deposits up to $777 and snag up to 77 free spins to check it out.

It’s also loaded with a spread of exciting features, including replicating wilds. Super Spins will initiate the game’s wild reels, in addition to grouped top symbols, tripling wild wins and incredible scatter payouts. They are initiated after a series of five free games. A total of three scatters are needed to trigger the Muchacha Free Games, during which wins with wilds are doubled. Free spins are eligible for re-trigger up to five times. Additional wilds are added to the round, with multipliers reaching up to 3X, depending on the number of scatters that triggered the feature.

Lucky Club Casino manager, Alex Hunter, commented, “This game’s Super Spins are sizzling hot! All those extra wilds and multipliers are going to make for some mucho grande payouts!”