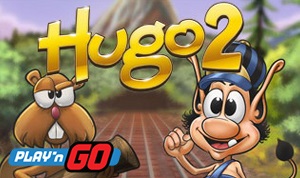 Play’n GO is at it again with another slot release, following up its most recent success, Big Win Cat. Hugo 2 is next on the list to go live and it’s scheduled to hit online casinos near you on November 23rd. It serves as a sequel to Hugo, and once again follows a friendly troll character, whom the game is named after, in his unique and heroic journey. The slot features 5 reels and 10 fixed paylines, and players will be taken on a quest to discover treasure, but it won’t be made easy—evil may be lurking around any corner.

The game’s main character will serve as the wild symbol, substituting for other icons on the screen (except for scatter and bonus symbols) to create more win combinations. Evil Witch Afskylia acts as the bonus scatter and when three or more land on the reels, the Skull Cavern bonus game is initiated! During the feature, players are prompted to choose a path and the goal is to safely reach the treasure chamber and select the correct key to unlock Afskylia’s treasure! Unveiling the treasure rewards a multiplier between 2x and 5x, depending on the number of lives you have remaining. Like you may be used to in video games, you’ll have a certain number of lives during play, so it’s particularly important to be cautious of potential dangers.

Additional lives are awarded when three, four or five scatters appear. You’ll get 1, 2 or 3 extra lives, respectively. Three beaver scatters on reels 1, 3, and 5 will initiate the Troll Race spin feature! Get 10 extra spins initially, with the possibility of 5 or 10 more spins during the feature. Free spin rounds also offer the chance to score wild items. When four or more are obtained, wild are applied to the reels, replacing an equal number of icons as the amount of wild items earned.