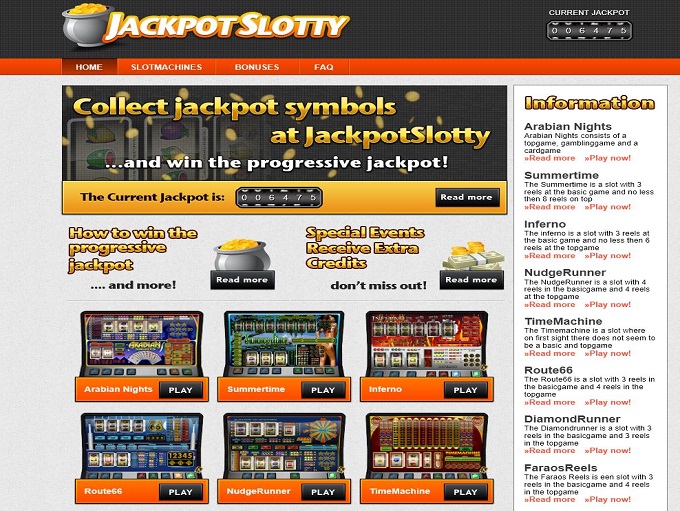 JackpotSlotty Casino is an independently developed gambling establishment that has a really small market to fill as it has not grown its client base since starting in 2008. Surprisingly it does not cater for the big European countries like Spain, France, the UK, Germany or Italy but it concentrates solely on Dutch speaking lands, in particular the Netherlands and Netherlands Antilles. They hold a licence in Curacao, which is decent enough, but a number of players often report problems regarding slow pay-outs and communication from casinos based on this Dutch owned Caribbean island.

JackpotSlotty Casino is part of a conglomerate of which is held by Yellow Stone Entertainment N.V. who has created their own electronically playable games with attributes not regularly found in with other online casinos. This uniqueness can also be a bit of a hit or miss result because people looking for standard gaming fare will have to get their kicks elsewhere. But the works well for gamblers wanting new experiences and trying out ideas that they have never come across before.

The site is in Dutch and runs flash based games so there is no worry of needing to handle large downloads. This makes it also accessible by portable devices and you can keep close with your smartphone or tablet using Wi-Fi connection. The interface has items where you can easily find them although the lack of sophistication and moderness may put people off.

Being small means that operations can be managed more tightly so their pay outs are quite fast when compared to their peers. To make a withdrawal a request for at least 10 euros has to be put in. Payment and withdrawal options aren’t lacking given choice of between Neteller, MoneyBookers, NedBet, Visa, MasterCard, Paysafe Card and Maestro. Keeping in line with the industry you can count on SSL technology to keep private information safe.

As mentioned before JackpotSlotty Casino has a limited number of themed video slots and a few of them include progressive jackpots too that are shared between the machines. Those games often include extra features like extra reels or uncommon side games. To collect the big wins, players need to accumulate as many J symbols as possible for a chance to open the Jackpot wheel of fortune. The main prize is when the spun when stops on said J symbol.

Currenty there are no reviews for Jackpotslotty. Be the first one who will review it.

Jackpotslotty Casino supports banking methods for deposits and withdrawals for