New Customer Offer. T&C’s Apply. 18+. Minimum deposit: 100 kr. Please note that you can not use deposits with EcoPayz, Skrill, Skrill 1-loss, Neteller, Paysafecard to qualify for our welcome bonuses. 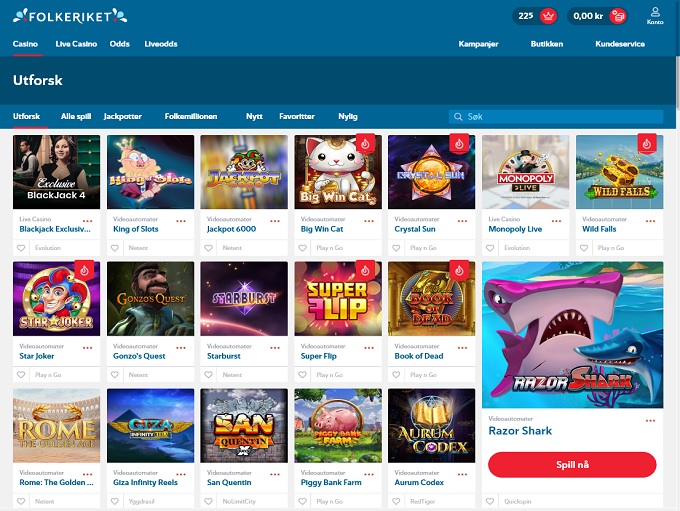 Folkeriket is a Norwegian online casino and was one of the first state-licensed casinos to debut in Norway back in 2013. It holds an MGA license, so non-Norwegians can play there. Naturally, as gameplay is all in Norwegian, there will not be too many takers for that, so Folkeriket remains a small casino site. Having an account with Folkeriket also gets you access to their sportsbook and live casino sites.

Norwegian players can use a variety of payment providers to top up their account. These include EcoPayz, MasterCard, bank transfers, AstroPay and MuchBetter, amongst a few others. Support is available via live chat and e-mail. Curiously, while the website and all the game play are in Norwegian, live chat and support are available in English, too.

All new players are invited to claim two bonuses when they first join Folkeriket. In total, these are worth up to 5,000 NOK and span the first two deposits that you make at the site. These deals are a prelude to the other top deals that Folkeriket Casino can offer Norwegian players. A separate welcome offer is available for those who want to bet on sports.

Folkeriket Casino regularly hosts tournaments and jackpot competitions but also prize draws. Millions of Norwegian kroner can be won via these. There is also a loyalty program at Folkeriket whereby players can earn points that can be spent in a shop. Purchasing promos is the primary way of snapping up deals and bonuses when you play with Folkeriket.

Folkeriket is packing titles from most of the renowned and reputable developers. Scandinavian powerhouse, NetEnt naturally offers slots and games to players at this Norwegian casino. You can also expect to see games from Play ‘n Go, Microgaming, NYX Interactive, Red Tiger Gaming and another Scandinavian favourite in Yggdrasil Gaming. Those games span slot machines, RNG (random number generator) table games, video poker, instant win titles and a few others. Live casino gameplay is also supported, with Evolution Gaming providing the lion’s share of those games.

There is no shortage of popular casino games to play at Folkeriket, and remember, you can use your casino account to place sports bets, too. Some of those top casino games include Gonzo’s Quest: MegaWays, Piggy Riches: MegaWays, the ancient Egyptian-themed Legacy of Dead, and the Dead or Alive II, Reactoonz, Jackpot 6,000, original Gonzo’s Quest, and Viking Runecraft slot machines, amongst others.

Currenty there are no reviews for Folkeriket. Be the first one who will review it.

Folkeriket Casino supports banking methods for deposits and withdrawals for