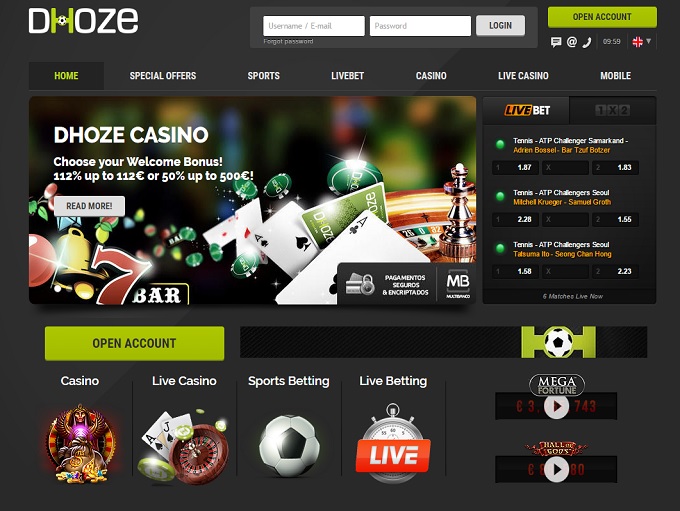 Dhoze welcomes players from most regions of the world, including many countries in Europe. The casino has much to offer everyone, with great games and outstanding promotions. But Dhoze is a particularly good choice for the people of Portugal. The Dhoze Casino supports two languages, English and Portuguese, and the currency they accept is the euro.

Dhoze has two online casinos that are a part of their large gaming operation. You can play in either “Casino Europa” or “Casino Las Vegas.” Both offer you a choice of two outstanding Welcome bonuses. One bonus will give you a high percentage for a deposit of as much as 112.00. If you make a bigger deposit, Dhoze will give you a bonus with a smaller percentage, but it could be worth hundreds more.

You can also play in Dhoze’s Live Casino which offers Baccarat, Blackjack and Roulette. Dhoze knows that most players who prefer a live casino enjoy interacting with a dealer, rather than having each hand or each spin of the wheel executed by a computer. That’s why their website offers full details about all of their live dealers. You’ll see a picture of each dealer, and you’ll find out each one’s age, lucky numbers, hobbies and other personal details. Dhoze lists all this information in their “Meet The Dealers” section.

This site uses several different software developers to provide their games, including industry leaders Microgaming, NetEnt and Playtech. That means you can play a number of familiar games in this casino, including such popular slots as “The Dark Knight Rises,” “Mega Fortune” and “Starburst.”

Since Dhoze also has the games of several lesser known producers, including Leander, Thunderkick and Quickspin, you’re also likely to find several games you have never played before. One slot that you may not have tried is  “KIng Colossus,” a game developed by Quickspin. It has 5 reels, 40 lines and includes a bonus round that offers many free spins and “Guaranteed Wilds.”

Dhoze also offers all of the other popular casino games, including a choice of French, American or European Roulette. There are also six versions of blackjack you can play as well as a dozen video poker games.

There is also a wide choice of progressive jackpot games available in the Dhoze Casino, including nine progressive slots. You can also play “Jackpot Caribbean Stud” as well as a game not seen in many online casinos, “Jackpot Bonus Keno.”

Currenty there are no reviews for Dhoze. Be the first one who will review it.

Dhoze Casino supports banking methods for deposits and withdrawals for