Bohemia Casino has a warning, we advise you play at another casino. 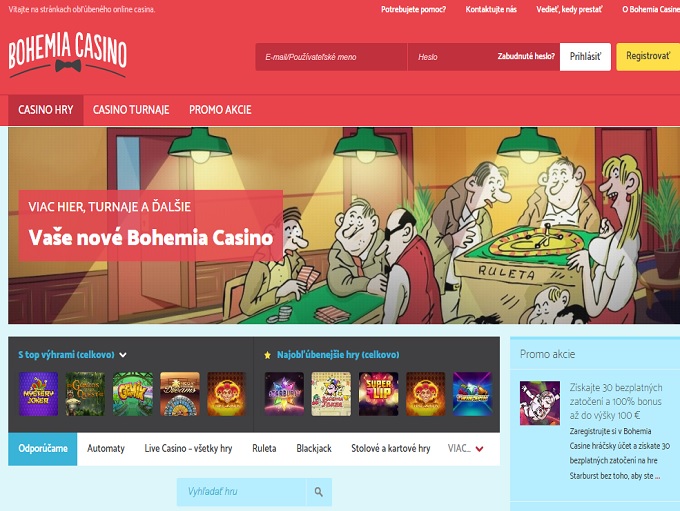 This is not a casino that many players from around the world can or would join. The main reason is that the only language supported by this site is Czech. They do accept euros as one of their two currencies-along with Czech Koruns-and they do accept members from countries other than the Czech Republic. But they do not welcome players from either the United States or the United Kingdom.

If you are eligible and interested in being a member of Bohemia Casino, you can claim their Welcome bonus. They will give you a 100% cash match of your first deposit that can be worth as much as CZK 2,500. The value of this bonus is approximately 90 euro. Bohemia will also give you another gift just for joining their casino. You’ll get 10 free spins on their slot game, Mystery Joker.

Bohemia, which is a site licensed in Malta, has other promotions in their casino, including special drawings for valuable prizes. They also have races that will reward the players who have the best results playing designated games.

If you want to make a deposit into your Bohemia account, you can choose among a few options. The casino accepts Visa, Master Card, Skrill and Paysafecard. You can also send them a bank wire transfer or you can use Mobile Phone Payment.

If you are in need of support from Bohemia Casino, your best bet is to contact them with an email. You could also write to their home headquarters, which are located in Malta.

This site gives you a big selection of games, with several notable software companies providing the action. Among the companies that have contributed games to the Bohemia Casino are Microgaming, NetEnt and NYX Gaming. There are dozen and dozens of games to choose from, including all of your casino favourites. There are video poker games, table games as well as mini games.

Bohemia also has more than a hundred slots. Among your choices at this casino are several jackpot games that offer the chance for a gigantic payoff. These include such slots as Jackpot Jester 50,000, Cosmic Fortune, which has a progressive jackpot, and Merlin’s Millions with Superbet. That slot from NYX Gaming has four lines and five reels and includes a special bonus round which gives you the chance to get extreme multiplied wins.

Currenty there are no reviews for Bohemia Casino. Be the first one who will review it.