Azart Mania Casino has a warning, we advise you play at another casino. 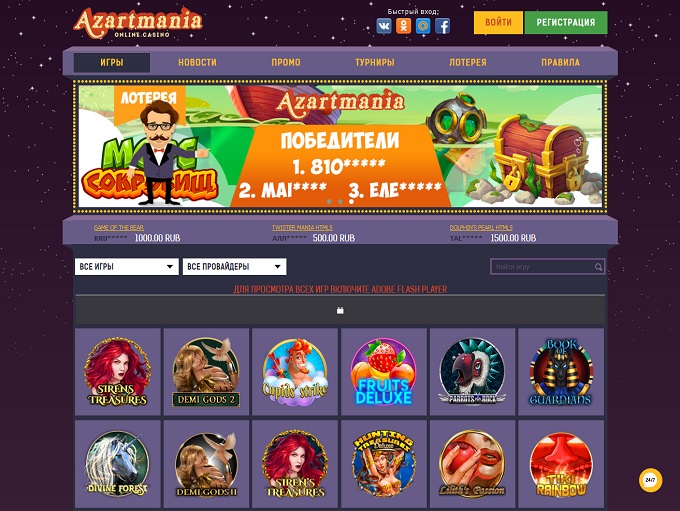 Azart Mania is an online casino which debuted in 2012 but has over the last year or so slipped to a somewhat questionable rating in the eyes of casino players. The domain has currently been found to be operating without a valid casino license, and worse still faces accusations of running pirated/fake games at the domain. These are generally rigged to ensure that players stand less chance of winning. None of this will fill players with optimism.

On top of the bad news already uncovered about this casino, there is a bit more. Azart Mania Casino is known to have a withdrawal cap of $2,000 per month attached to its cashouts. This is an exceptionally low limit, compared to most other casinos. In short, high rollers would be permitted to wager vast sums of cash on games, but only withdrawal two grand per calendar month. This hardly seems fair. There is support available in English via live chat and e-mail, but neither has proven to be particularly valuable to players, who may face long waits to obtain help.

The online casino primarily targets players in Russia, and that is worth considering. The typical welcome bonus offer is worth a 200% match on the first deposit that you make as a new player. However, given that the other aspects of the casino are dubious at best, we’d imagine that there are high wagering requirements and other small-print issues which you may wish to take onboard. Other promotions and bonuses at Azart Mania Casino are few and far between.

The casino claims to feature a handful of games from leading providers. However, the only casino software providers we could find include Igrosoft, Spinomenal and Mr Slotty. None of those are overly renowned developers. Moreover, if the games are indeed pirated, then your odds of success are less than they would be if you were to play the games at another site. Casino games include slots, roulette, video poker, blackjack and a handful of keno games. The true array of table games is a lot smaller than the selection of slots housed at the site.

Some of the games that Azart Mania does claim to be able to offer include Siren’s Treasures, Demi Gods 2, Fruits Deluxe, Book of Guardians and Cupid’s Strike. Again, though, we’d stay away from this casino for the time being.

Currenty there are no reviews for Azart Mania Casino. Be the first one who will review it.