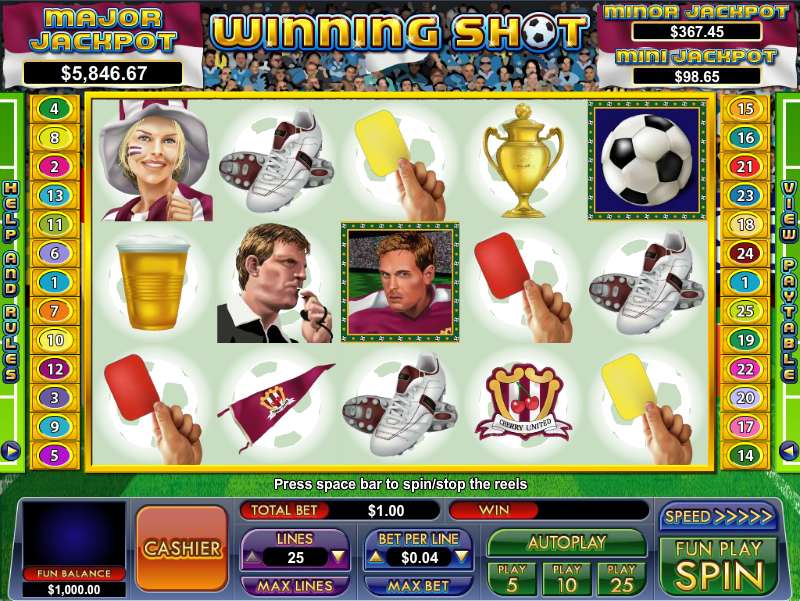 NuWorks may be a fairly new player in the online gaming industry, but they have an unconfirmed connection to RTG software which lends some credibility. These games are being more popularly played, and Winning Shot is one of their new slots. Themed on the classic game of football, this five reel, twenty-five pay-line game offers a Mini, Minor, and Major jackpot prize, which indicates the tiers of the PJP. Currently the Major prize contains $6 357.93.

What is one of the more notable special features in NuWorksgames, is the ability to indulge in a Jackpot scheme. Basically players are able to access a pyramid type concept where reaching higher levels of achievement leads to a larger progressive jackpot prize. That having been said, this football themed slot is available for play in demo mode, as well as through a number of well-respected online casinos.

This super video slot features great graphics and appropriate ambient sounds for what has become the major spectator sport throughout the world. Symbols are iconic of football which is apt, and they are a Striker, fan, referee, yellow and red cards, pennants, coat of arms, glasses of beer, entry tickets, football boots, a trophy, and of course a football.

Players may control the number of lines they play between one and twenty-five, and place bets of from 0.01 up to 5.00, which makes a maximum wager of 125.00. Only one coin per line is allowed. Auto-play is also featured as well as speed control. The Striker is the wild card and can win up to 20000 coins, it substitutes for all other icons except the scatter football. This football also triggers multiplied pay-outs of between 2 and 100 x.

The Goal High Kicking feature is triggered when three or more footballs appear anywhere on the reels. The amount of goals scored from the first shots determines the size of the prize, and the final ball is a gold ball. This will double prize money based on the size of the triggering wager.

A Win-Win bonus game is made active when all twenty-five lines are played, and this will trigger at the end of any free games in the Goal Kicking Feature. There is a g=very good chance that 100 x wager can be won when players have not won anything during free games. The more the player wins, the less the size of the multiplier in this bonus round!

Currenty there are no reviews for Winning Shot. Be the first one who will review it.