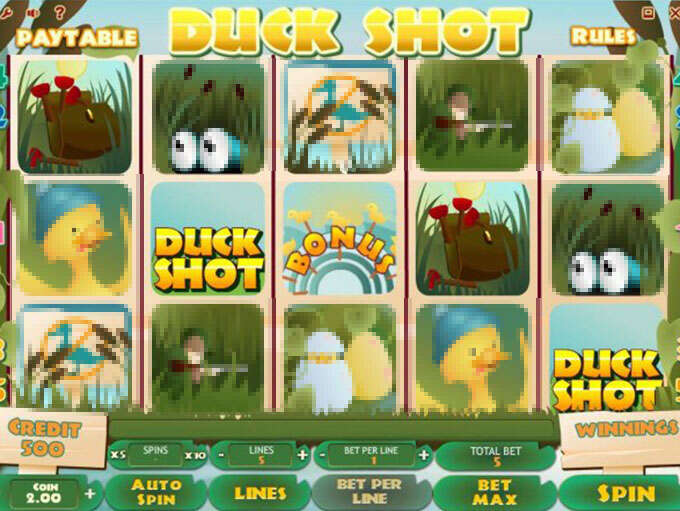 The slot game of Duck Shot resembles the type of activity you might take part in at a carnival or a fair. The only difference is you won't be trying to win a stuffed animal or a toy. You'll be playing for real money.

Duck Shot tries to recreate the atmosphere of an actual duck hunting experience. You're taken to a marshy area that resembles a duck's habitat. The symbols in the game include a small duck wearing a helmet and two sets of hatching duck eggs. There is also a Hunter as well as some of his possessions,  including binoculars and a bag. There is also a Warning Sign which has a picture of a duck in a circle with a line drawn across.

The most important symbol in the game is the Duck Shot logo. If you get three of them on an active line, it will trigger a bonus game. If you get five on one line, you'll win the game's maximum jackpot of 5,000 coins. Four logos on one line also pays substantially, offering a return of 1,000 coins.

There is no Wild symbol in Duck Shot, but to make up for it, you only need to get two of any symbol on a line to collect. Of course the returns are better the more matching symbols you get. In addition to the 5,000 coins you can win for five Duck Shot logos, you can also get 2,500 coins if you get five of the large hatching eggs or five of the helmeted duck.

If you get at least three of the Duck Shot logos, you'll get to play the bonus game. You'll be taken to another screen where you will win prizes by shooting ducks. There is a gun that you can click which will let you shoot and if your shot hits the duck, you will win a prize.

After each successful shooting, you will then have to decide whether to collect your winnings or to continue on. The prizes will get bigger, but if you miss, you'll lose all of your previous bonus game winnings.

Currenty there are no reviews for Duck Shot. Be the first one who will review it.