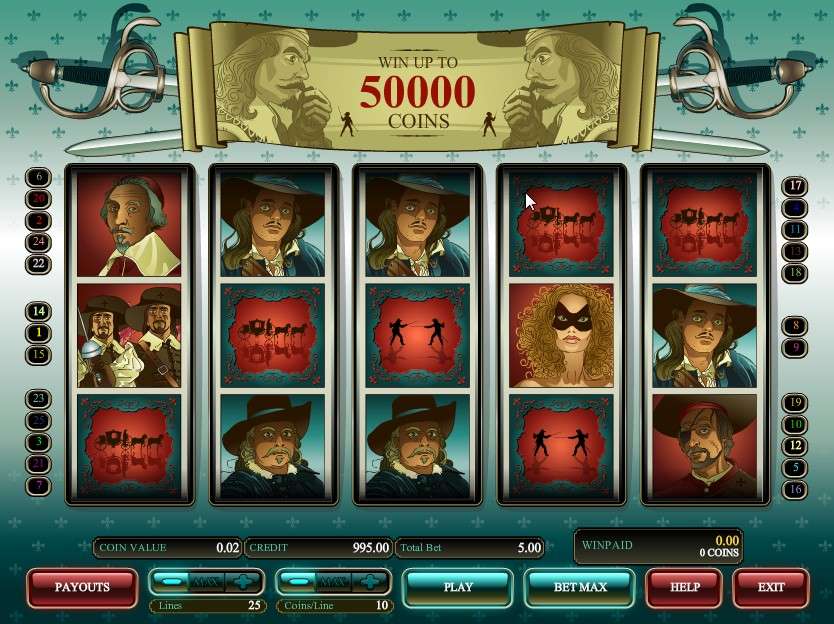 D’Artagnan is not the most visually stunning video slot you will come across, and neither is this B3W video slot the most entertaining. All the same, it does allow you reasonable control over your bets, and it does offer you moderately fair winnings. It is not very easy to find in online casinos, though, so players might be pressed to try to locate it. Even so, D’Artagnan features a basic 5 reels and 25 paylines to bet on, with coin values fixed at 0.02 in value. You can wager as many as 10 of these per line, so you are going to find that you are wagering anything from a low of 0.02 per line, per spin, up to 5.00 per spin in all. That seems a respective enough wagering range, given the prizes you can win playing D’Artagnan. The top non-progressive jackpot for instance is fixed at 5,000 coins.

There are three special icons in this game: the crown, the dinner’s ready (musketeer), and carriage icons. Let’s start with the crown, since that is the game’s Joker (wild symbol). As a wild, it can replace all other symbols in the game, barring other special icons. Jokers can appear on the second, and fourth reels, and when they do they will expand to cover the entire reel on which they appear.

The Dinner’s Ready (musketeer) icon appearing all across the top row, four times on the second and third rows at once, or three times on each row of the game will trigger the “By the Hills and Valleys” bonus game. In this bonus game, the player can select 1 city out of a total of 20. They will then get to bag a reward from the Cardinal, based on how many bonus icons they located to start the bonus. Multipliers of between 2x and 40x are possible with this feature.

If you are fortunate enough to land 5 of the carriage symbols on a line, then you will trigger the Intrigue at the Courts bonus round. In this bonus, players will be met with a grid, which contains hidden Atos, Portos, Aramis, D’Artagnan, and the King icons. Players will pocket rewards based on the symbols they uncover. Once you have located three identical icons, the game pays out its prize, and the bonus ends. Naturally, the king symbol is worth the most.

Currenty there are no reviews for D'Artagnan. Be the first one who will review it.