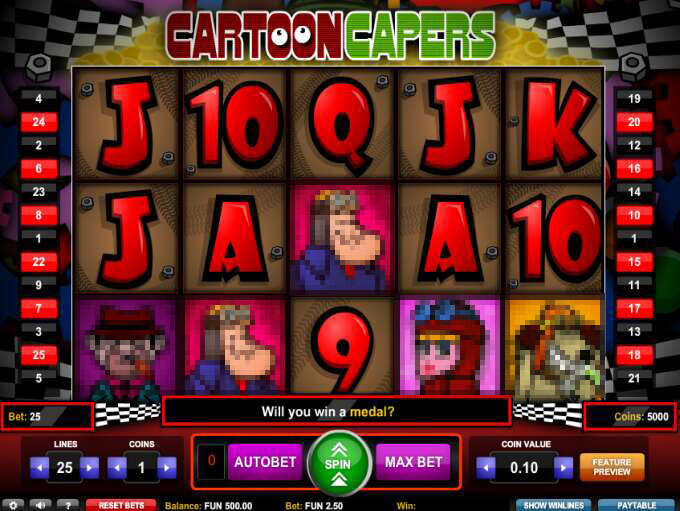 Due to technical difficulties, game has been discontinued by the manufacturer.
Please see other games from the same category.

From the moment that 1x2 Gaming’s Cartoon Capers game loads, you can tell that it is supposed to be themed on the Wacky Races cartoon. It is also obviously unlicensed, which is why it does not contain the real name. Cartoon Capers is still plenty of fun to play, though. The video slot is played over 5 reels and there are a total of 25 paylines for you to bet on. Coin values in this game range from 0.01 up to 0.50 in total, and players can wager anything from 1 to 5 coins per line. Whilst you can win up to 900 coins in total playing this slot, it will set you back between 0.01 per line, per spin, and 62.50 per spin.

Three special feature icons have been included in this game. The first is the monster icon. That symbol is the wild. As a wild, it can replace all other icons in the game, excluding the free spin and bonus icons. The wild symbol will always count towards the highest possible win.

Cartoon Capers’ free spins symbol is the character based on Dick Dastardly. Landing three or more of this icon anywhere on the reels will trigger a free spins bonus round. Players will land 5, 10 or 15 free spins for 3, 4 or 5 of these free spins icons. During the free spins bonus game, all winnings are doubled.

The bonus round icon is the general. When three of these symbols appear anywhere on the reels, the player will trigger the Safe-Cracker bonus round. The general icons can also see players pick up scattered wins of 30x, 100x or 200x their total bet, when they find 3, 4 or 5 of them in any positions on the reels, respectively.

In the safe-cracker bonus game, the character representing Mutley (Dick Dastardly’s dog), will be standing before five safes, with a matchstick. The player can then click on the safes one by one, and they will explode, revealing cash prizes. Not all of the safes will have cash in them, and the most common cash prize in this bonus round is 75 coins. On the plus side, players can blow apart all of the safes to win cash, so they needn’t worry about finding “collect” signs.

Cartoon Capers may not be licensed, but it is a fun and simple game to play.

Currenty there are no reviews for Cartoon Capers. Be the first one who will review it.