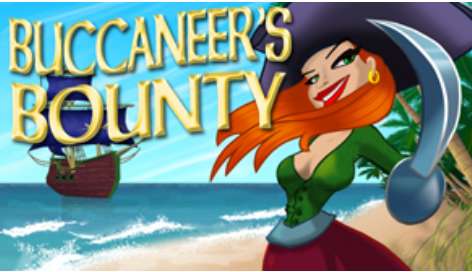 Buccaneer’s Bounty is a pirate themed video slot, and one which is quite cartoony in the way that it has been developed. It was created by Cryptologic (now owned by Amaya Gaming), and there is something very “Monkey Island” about the game. Buccaneer’s Bounty is a simple enough slot (graphically, and structurally), since it contains 5 reels and 20 lines. Players can adjust the paylines as they see fit, and they can also choose line bets which range from 0.01, up to 40.00 in total. Naturally, minimum and maximum wagers therefore spread from 0.01 per line, per spin, up to 800.00 per spin. With a good run on the reels, you can win as much as 6,000 coins in this non-progressive jackpot slot.

Buccaneer’s Bounty utilises a stash of gold as its wild symbol. When this wild icon appears, it can replace all other symbols in the game, save for the pirate ship. This pirate ship icon is the game’s scatter symbol. Wilds are the most valuable icons in the Buccaneer’s Bounty slot game, being worth up to 6,000 coins if 5 appear on any active line.

Meanwhile, the scatter icon is the pirate ship. This icon can appear on all of the reels in the game. Should it appear 2, 3, 4, or 5 times anywhere on the reels, then you are likely to be walking away with scattered wins of 2x, 5x, 10x, or 100x your total bet, respectively. You will also trigger a free spins bonus round with 3 or more ships appearing on the reels.

If you land the treasure chest icon on the first and fifth reels at the same time, you will get to choose from two bonus games. These pick and win bonus games can see you win anything up to 25x your total triggering bet.

Buccaneer’s Bounty has a pretty entertaining free spins bonus round, too. This bonus game is triggered by landing three or more pirate ship scatter icons on the reels. A total of 10 free spins are awarded in this bonus game, but that’s not the best news. The best bit is that all of your prizes will automatically be doubled in this bonus round. The feature can be retriggered simply by landing more scatters during gameplay. It sounds simple, but Buccaneer’s Bounty has paid out decent enough wins via this bonus in the past, and that makes it rather endearing.

Currenty there are no reviews for Buccaneer's Bounty. Be the first one who will review it.