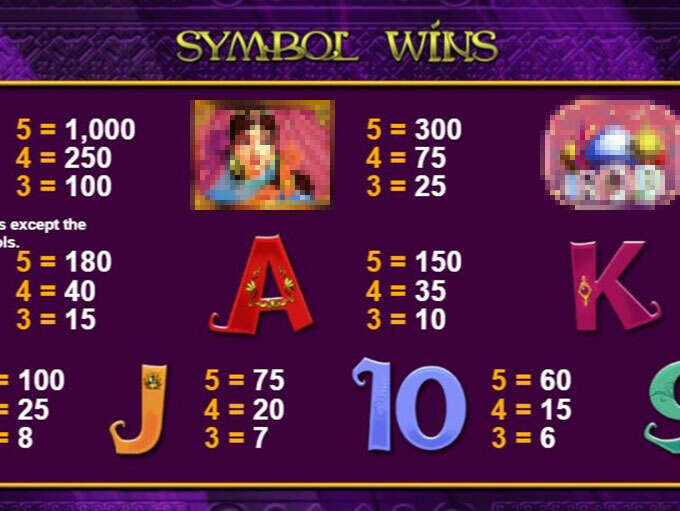 Well, everyone knows the story of Aladin’sLamp, it is a tale that has been told since Arabian Nights were first shared with the world. This version of the story comes as an online slot, and is a popular them for fans of these games. It is a Cayetano Gaming production, and this is probably the first time this writer has played any of their games. Typically video slots are comprised of five reels, this game is no exception to the rule, and hasa rather large forty pay-lines to cover. In-game symbol wins offer a maximum prize of 1000 coins, but there are many other ways to win too.

Aladin’s Lamp offers well-crafted symbols which are nicely illustrated, together with a sound track appropriate to the theme. Five reels are set into a backdrop that is bright, colourful and fun, as well as reminiscent of a Persian city. Icons are Aladdin, Princess Jade, an Arabian city, a ruby ring, and card indices of Ace, King Queen, Jack, Ten and nine. Three scatter symbols marked “Arabian” tales will trigger free spins or the Magic Lamp Bonus, while random stacked wilds are awarded when the Genie comes out of the lamp.

There are a number of bonus features to take advantage of. For example a the free spin scatters can also trigger a bonus game. However, Aladin is the random wild icon and is able to trigger free spins too. This symbol will reward the player with between two and six random wild icons, together with 3 x multipliers.

The Magic Lamp bonus game is triggered when the Genie pops out of the lamp – all reels are then covered with the Magic Lamp icon offering instant wins in the form of multipliers. While we managed to get into the free spins bonus game, and were awarded nine for free, we were not fortunate enough to land in the Magic Lamp Bonus game.

Currenty there are no reviews for Aladin's Lamp. Be the first one who will review it.