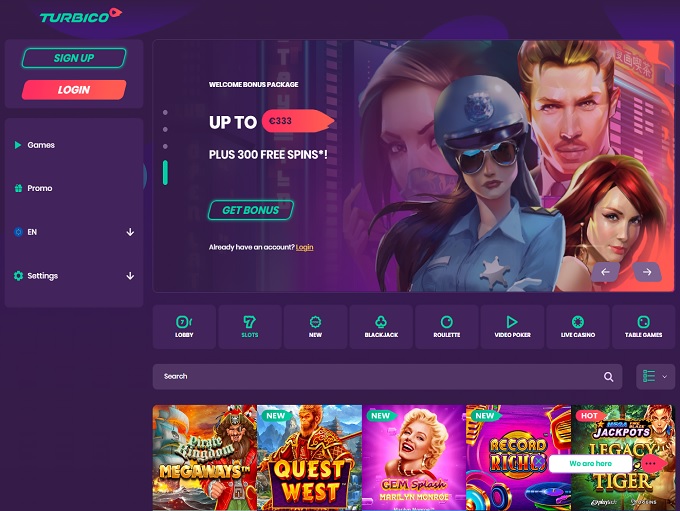 Turbico Casino is ideally suited to players who prefer to try their hand at mobile casino games. The layout and design of this site are very agreeable to users on smartphone and tablet devices. Making its debut rather recently, this SSL encrypted domain is rapidly becoming a bit of a hit with European players. They carry over 700 games and offer gameplay in English, Finnish, German and Swedish. Turbico is owned by Blackstone System limited and is a part of the Bethard Group. The site is licensed out of Sweden and Malta.

Players can refer any questions or queries they may have to the FAQ guide at first. This is a suitable page which should help solve most issues. However, if players do wish to contact customer support, they can do so via live chat or e-mail. Payment methods are few and far between, though. Trustly appears to be the only accepted option, making the casino most ideal for players in Scandinavia, where Trustly is frequently used to top-up accounts and withdraw winnings.

Turbico does not carry any promotions or bonuses. This is in part because they primarily aim their services at players in Sweden and Germany, where restrictions are in place on what a casino can or cannot offer in terms of deals. Of course, the lack of any real promotions and bonuses is going to work against the casino, in that many players will be put off by playing at a domain which doesn’t offer loyalty deals at the very least.

Turbico’s games, fortunately, make up for the lack of any bonuses and promotions at the casino. Just over 700 of those are available, from a wealth of different casino software providers. Notable developers include Thunderkick, Yggdrasil Gaming, Quickspin, and Net Entertainment. In short, all the major providers who are based out of Scandinavia, themselves. However, Evolution Gaming also dishes out games at this site, with those titles being live dealer casino games. Other games include slots, jackpot games, roulette, blackjack and all manner of table games, as you would expect to find in any leading casino domain.

Currenty there are no reviews for Turbico Casino. Be the first one who will review it.