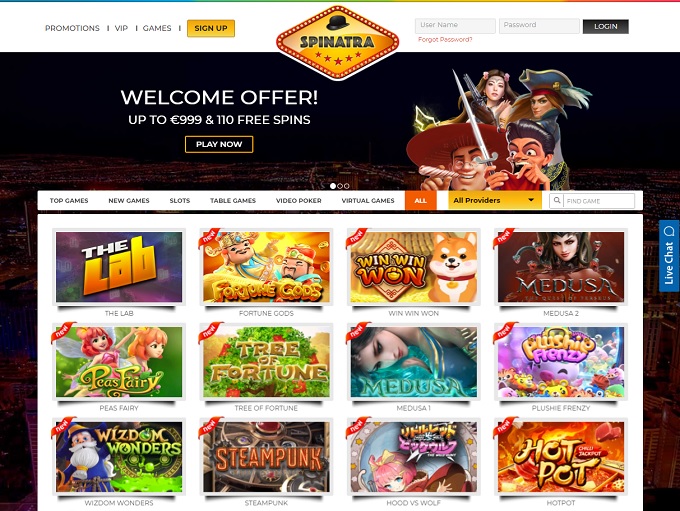 Spinatra Casino is still a relatively new internet casino site, having made its debut in 2018. The site is owned by Cetrocon Software and is licensed out of Curacao. Notably, the casino only offers gameplay in English and uses the euro as its currency of choice. Both instant play and mobile casino gaming is made available to members of Spinatra.

When depositing at the casino, players must use euros. However, Spinatra accepts a variety of payment methods. These include MasterCard, Neteller, Skrill and even Bitcoin. The domain features Comodo SSL (Secure Socket Layer) encryption, so it’s safe to play at. It provides customer services to players using live chat, e-mail and telephone, but these services are not available around the clock.

Join Spinatra Casino today, and you can claim bonuses on the first three deposits that you make as a new player. This three-pronged offer starts out as a 150% match worth up to €333, and 22 free spins. Second and third deposits are worth 50% matches up to €333 and 44 free spins, respectively. Players must enter the SPINF150, SPINS50 and SPIN50 promo codes to claim each respective deposit bonus.

Two other bonuses packages can be claimed instead of the main offer. These drop free spins from the deal and are worth less in value. They can be viewed from the promotions page. A VIP club will see Spinatra Casino continually reward players who wager frequently on games at the site. Perks include deposits bonuses, enhanced withdrawal limits, birthday gifts and much more besides.

Spinatra Casino can dish out top and new games, virtual games, table games, slots and video poker titles to its users. These come from 1x2 Gaming, Ainsworth, BetSoft Gaming, Blueprint Gaming, ELK Studios, Habanero, Iron Dog Studios, Red Rake, Spinomenal, Wazdan and a handful of lesser-known developers. In all, over 500 games can be found and played at this online casino site.

Currenty there are no reviews for Spinatra. Be the first one who will review it.

Spinatra Casino supports banking methods for deposits and withdrawals for