20 Casino Spins
New Customer Offer. T&C’s Apply. 18+. NO US! 20 Free Spins on "Fa Fa Twins". How to claim the bonus: New players need to sign up from our LINK. You will receive a verification email. After you verified your email address, go to your Account, click on "Bonuses" and activate the promotion. The free spins will be added automatically. Max cashout: 20.00 EUR, 20.00 USD, 30.00 CAD, 200.00 NOK, 30.00 NZD, 90.00 PLN, 1,800.00 RUB, 2,500 JPY, 130.00 BRL, 1,750.00 INR, and 7,000.00 HUF. Games contribution towards wagering: Slots - 100%. The following games do not contribute to bonus wagering requirements: See website for list. All table games, Roulette and Video Pokers – 25%. Once credited when does the bonus expire: 3 days after registration. If free spins what is the allowed max bet per spin: 5 EUR. Min deposit needed in order to cashout winnings: Yes; €/$20. Bonus can be claimed in conjunction with sister casinos no deposit: No. Is the bonus cashable: Yes, after the wagering has been completed. Is No deposit available on download &/or instant play version: Instant version. Is No deposit available on mobile: Yes. Restricted country for this bonus: Finland, Sweden and the State of Palestine. Promo offer valid: Until further notice.
cashable and no deposit
45xB
CLAIM
exclusive

150% up to €350
New Customer Offer. T&C’s Apply. 18+. NO US! 150% up to €350 + 100 Free Spins on "Fa FaTwins" or "Book of Dead". How to claim the bonus: New players need to sign up from our LINK and make at least a minimum deposit. The match bonus will be added automatically. The free spins will be added in packs (20 Free Spins every day within 5 days). Minimum deposit: €20. No maximum cashout. Restricted games: See forum post for list of online slots. Once activated when does the bonus expire: In one week. Cashable bonus: Yes. Available on mobile: Yes. Restricted countries from this bonus: Belarus, Finland, Palestine, Sweden. Exclusive promo valid: Until further notice.
cashable
45xB
CLAIM 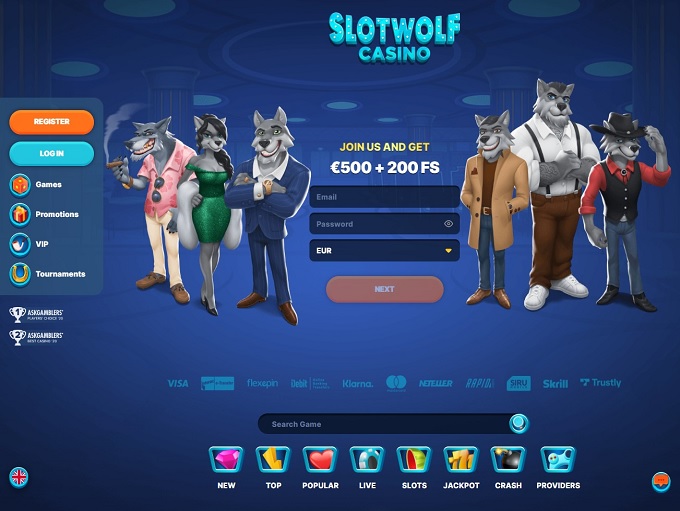 Slot Wolf Casino may be a new kid on the block, but the internet betting site has attracted a crowd since its launch in 2019. Owned – like so many casino domains – by N1 Interactive Ltd, Slot Wolf Casino is a Malta Gaming Authority (MGA) licensed domain, and one which provides betting options in English, Russian, Finnish and German.

The casino gaming portal accepts a variety of currencies for players to use, not least euros, US dollars, and Canadian dollars. It also supports a plethora of banking methods which include VISA, Maestro, MasterCard, Skrill, Neteller, Paysafecard, Bank Transfers and others. Support is one hand at the casino via live chat, e-mail and telephone. The latter may be toll-free, depending on where you reside.

After signing up at the internet casino, players can claim match deposit bonuses on their first four deposits. However, there are two separate paths to the take. The first is the standard welcome bonus which promises matches of 100%, 70%, 110% and 30% on those deposits. The second is a high-roller deal worth matches of 100%, 70%, 110% and 50% on each respective deposit. Up to €3,000 can be claimed with the welcome bonus at Slot Wolf.

Other promotions and bonuses at this online casino are few and far between, but those which are provided could still deal out a tasty deposit deal or free spin offer here or there. More information on deals can be found via the promotions page at Slot Wolf Casino. A VIP club is also housed at this internet betting site.

Players will find a positively extensive array of casino games which can be played at Slot Wolf. These are known to include titles from BetSoft Gaming, Evolution Gaming, Endorphina, Pragmatic Play, Quickspin, Booming Games, Net Entertainment, ELK Studios, 1x2 Gaming, Amatic Industries, Yggdrasil Gaming, Thunderkick, NextGen Gaming and Ainsworth. SoftSwiss powers the online casino, so their games can also be found and played as proprietary software at the site.

The types of games you can play at Slot Wolf Casino largely include online slots. However, table games and a handful of live dealer titles can also be played. In all, over three thousand casino games are currently available for players at the site. Major titles include Yokozuna Clash, 2 Million B.C., Wunderfest, Wolfpack Pays, Wins of Fortune and a handful of progressive jackpot slot games.

Currenty there are no reviews for Slotwolf Casino. Be the first one who will review it.