$7
New Customer Offer. T&C’s Apply. 18+. $7 no deposit bonus for new players, only available if no other no deposit bonuses were redeemed previously.
Code: FREESLOTS
non cashable and no deposit
40xB
CLAIM 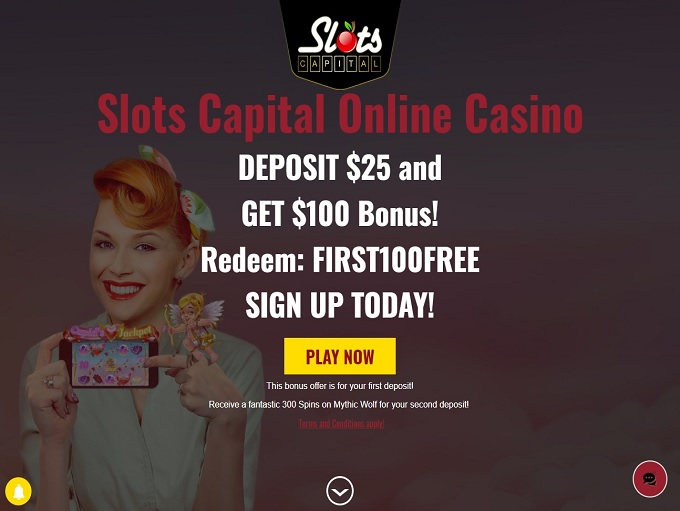 You’ll know you’ve arrived at this site when you encounter the Slots Capital insignia on their home page. In the word “Slots,” you’ll see a cherry in place of the letter O. Also on their home page, you’ll see a young woman who is gasping with excitement apparently after winning a good deal of money in the casino.

If you’re a new member of Slots Capital, they will help you get started in your own quest to win a lot of money. The casino has several bonuses you can claim. They begin with a No Deposit bonus of 7.00 which you’ll receive just for signing up.

When you make your first deposit, there is a lot more bonus money coming your way. New members from the US or Australia will receive an amazing 277% bonus when they first fund their account. That bonus can be worth as much as $2,777.00. For new members from other countries, Slots Capital also offers as much as 2,777.00, but it is spread over their first two deposits.

Once you become a member of the casino, you’ll become a part of the Slots Capital VIP Club. “Our Club is waiting to pamper you with goodies,” the casino says on their website.

The Slots Capital VIP Club has 4-tiers, beginning with the first rung called “Special.” The next levels are Gold and Platinum and the top rung is known as the Diamond level. Members who reach that top tier will receive such bonuses as a $200.00 birthday gift, 20% cashback on weekends and daily bonuses which will be 50% bigger than the norm.

This casino has more than slots, since you can also play video poker and many of the most popular table games. But as their name suggests, Slots Capital is mostly about slots. They utilize the software of Rival, which means they offer the exciting i-Slots that have created great excitement throughout the online casino world.

i-Slots not only have great graphics and sound, they also have bonus rounds that can be quite lucrative and exciting. They also reward players for their good play. i-Slots are not just games of chance but also games of skill.

Slots Capital also offers a number of Rival games that feature progressive jackpots. You can win a fortune playing such slots as One Million Reels BC, Strike Gold and Major Moolah.