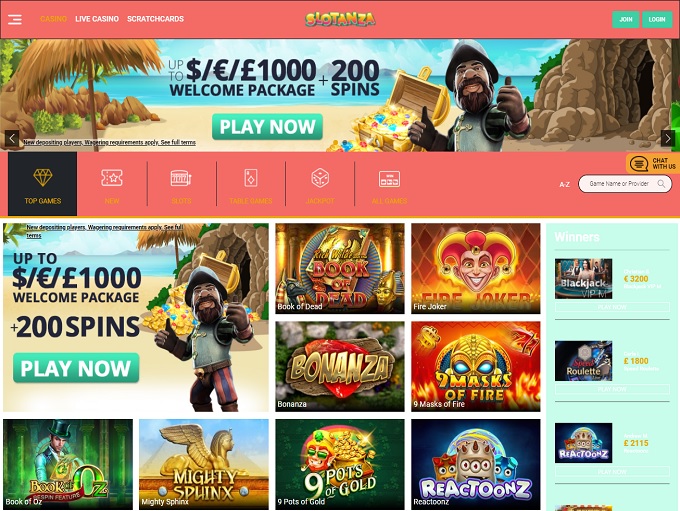 Slotanza Casino is an online casino which will appeal to mobile casino users. Its design and interface are tailor-made for gaming on the go, although that shouldn’t dissuade players who prefer a computer-based experience from having a crack at the game. Slotanza only launched in 2019, so it is still a small-scale casino, albeit one which is licensed out of Malta but also the United Kingdom.

Flexible deposit options are one of the highlights of this site. Slotanza accepts Skrill, Neteller, Paysafecard, EcoPayz, VISA, MasterCard, Sofort, Instadebit, Trustly, PayPal and half-a-dozen other options. Withdrawal times are speedy (1-3 days) and the site offers multilingual support to users via a live chat platform. An FAQ and other forms of assistance are also supplied.

Any new player at Slotanza is invited to claim a tasty welcome bonus which delivers up to £1,000 in cash, as well as 200 free spins on top slots such as Gonzo’s Quest. A minimum deposit worth £10 is required to claim this offer, which is worth up to £200 on the first deposit, with the rest available on subsequent deposits.

Aside from the prosperous welcome package, Slotanza also carries a few other deals which may interest players. There is a VIP and rewards program which can see players acquire points when they bet on games. Those points can be used to snap up other goodies. Players need to progress up the loyalty ladder to bag bigger and better bonuses as they play.

Slotanza’s site is divided up into two distinct sections. The first is the main casino, which carries slots, table games and all manner of other gambling games. The second section is reserved for online scratch cards, and the house carries plenty of those for you to have a crack at. Casino games, on the whole, come from developers which include Net Entertainment, Microgaming, BetSoft Gaming, NextGen Gaming, Play ‘n Go, NYX Interactive, Amaya, Evolution Gaming, Pragmatic Play, iSoftBet, Blueprint Gaming, Red Tiger Gaming, Lightning Box Games, and others.

Most of the games found at Slotanza are naturally slot machines. However, roulette, blackjack, baccarat, craps, and a handful of other table games can also be played. Some of the more popular slots at the casino include the legendary Starburst, Thunderstruck II, Gonzo’s Quest and the Rich Wilde and the Book of Dead slots. Fruity Friends, Banana Rock, Mighty Sphinx, Twin Spin, Rise of Olympus and Sabaton are also popular with players.

Currenty there are no reviews for Slotanza. Be the first one who will review it.

Slotanza Casino supports banking methods for deposits and withdrawals for