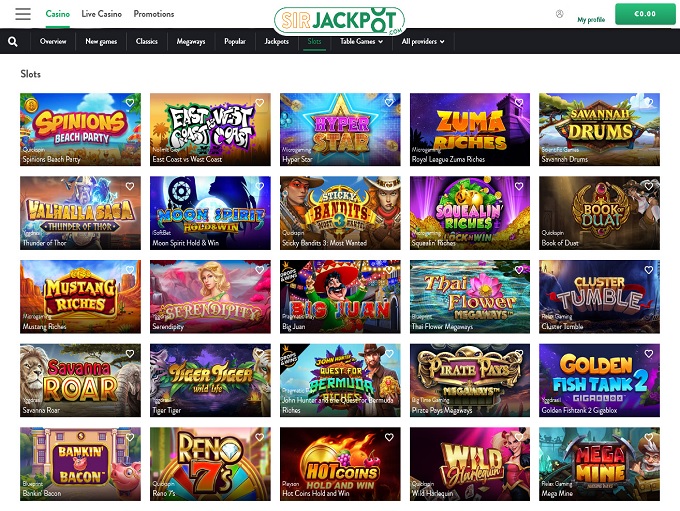 Sir Jackpot Casino is a Curacao licensed online casino, and one which first got its break back in 2015. The online casino site is operated by Elec Games Limited and primarily offers gameplay to players in English, Finnish, Norwegian or Swedish. The casino also holds a license issued by the MGA of Malta, making them rather appealing to players in Northern Europe. Sir Jackpot uses the euro currency and does not accept players based in the USA. Mobile gaming is possible alongside instant play gaming at this casino.

This is not an online casino which offers a wealth of deposit options, although those it does offer include some big methods, such as Euteller, Trustly, Zimper, Instadebit, MasterCard, Neteller, Skrill and VISA. Players can seek assistance via live chat or e-form, with no telephone options currently offered over at the online casino site.

Under their campaigns header, players will find a host of decent promotions and bonuses. To get the ball rolling, all new players are invited to claim not one, not two, but three solid welcome bonuses spread over the first three deposits they make at the site. In total, these bonuses are worth as much as €700 in cash and come via 200%, 50% and 25% matches worth up to €100, €200 and €400 over said deposits, respectively.

Alongside the welcome bonus, Sir Jackpot Casino is equipped with a Weekend Trip Bonus which is worth up to €300 if you fancy playing these monthly promos. Free spins can regularly be won and bagged via deposits, whilst free spins are usually handed out on Tuesdays, as part of the casino’s Freebie Tuesday deal.

Players over at Sir Jackpot Casino will find a host of casino games open to them. For starters, they can select titles from a mighty range of developers which include Net Entertainment, Evolution Gaming, Microgaming, Quickspin, iSoftBet, NYX Interactive, Yggdrasil, Thunderkick and ELK Studios. Those games encompass baccarat, blackjack, craps, live dealer casino games, roulette, slots, table poker and video poker games, many of which can be played as mobile casino games.

Some of the most frequently played games over at Sir Jackpot Casino include Foxin’ Wins: A Very Foxin’ Christmas, Finn and the Swirly Spin, Mighty Arthur, White Rabbit: Megaways, Phantom of the Opera, Route 777, Pink Elephants, Lucky Clover, Planet of the Apes, Hall of Gods, Pumpkin Smash, Blood Suckers II, Halloween and Danger: High Voltage, to name but a few.

Currenty there are no reviews for Sir Jackpot Casino. Be the first one who will review it.