Players are advised to proceed with caution, if you do win we may not be able to help you get your winnings. Too many reports of slow and denied payments. Non responsive and slow customer support. Aside from slow withdrawals players are now reporting "security checks" which can take from 60-90 days. During this time players are not allowed to cash-out. This is nothing but another stalling tactic. Players are then being told they won't be paid because they haven't played enough recently??!! Rumours are that the company that owns and operates this casino (Milmore Ltd.) does not exist in Cura?ao and are in fact not licensed and to top it off is linked to Affactive group. More Information 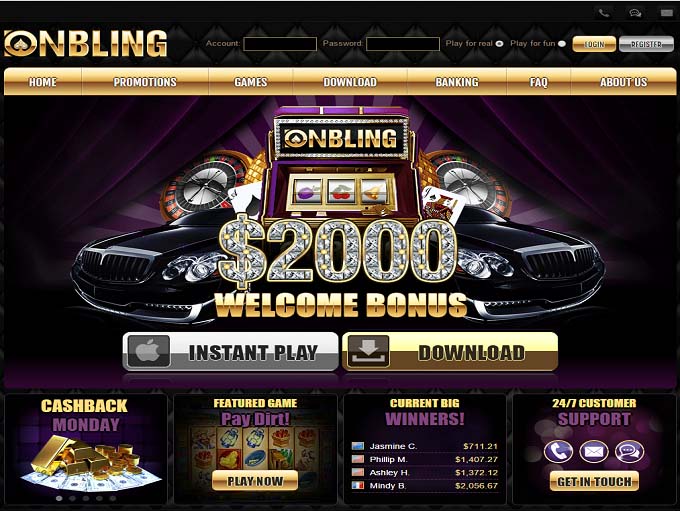 As you might expect from the name of this casino, the emphasis is on fancy baubles. Everywhere you look, you'll see either fancy gold lettering or glittering jewels. The lovely blonde model on the home page is adorned in diamond earrings and a diamond bracelet. Even the images from their logo, which include the four symbols from a deck of cards and the Lucky 7's from slot machines, are all encrusted in bling.

Even though the casino presents a very high-class image, they are not elitist when it comes to their membership. Almost anyone with internet access is welcome and On Bling Casino provides everyone with a big sign-up bonus  They also have special promotion codes which can be used for specific games, including slots, video poker, blackjack and roulette. On Bling also offers weekly specials as well as raffles which any of their members can win.

You can play with confidence at this casino since their games are continually tested and certified as fair by Technical Systems Testing (TST). They are a third party auditor who tests both online gaming sites as well as lotteries and other gaming companies throughout the world. TST states that the On Bling's games are “both random in outcome and fair in operation.”

Games at On Bling Casino

This is an RTG, or Real Time Gaming Casino which offers more than 150 games. On Bling describes the look of their RTG games as offering “beautiful graphics and crisp clean audio. You'll feel,” they continue, “like you're playing right on the La Vegas strip.”

The RTG games include dozens of slots, featuring such nature-based games as  Enchanted Garden, Field of Green and the sequel, Field of Green 2. They also have a number of historic themes such as Achilles, Aztec’s Millions, Aztec's Treasure and Incan Goddess. If you prefer games that feature animals On Bling brings you Penguin Power, Lion's Lair, Funky Monkey and Golden Retriever.

On Bling also has 19 versions of Video Poker in their casino, including every popular variation. Whether you like Jacks or Better, Deuces Wild, Joker Poker or Bonus Poker, On Bling has it and they give you several variations of each version to choose from.

The casino doesn't slight fans of table games, either. There are more than 20 to choose from, including seven different versions of blackjack. There is also Roulette, War, Red Dog and even two variations of Vegas Three Card Rummy.

Currenty there are no reviews for Onbling Casino. Be the first one who will review it.