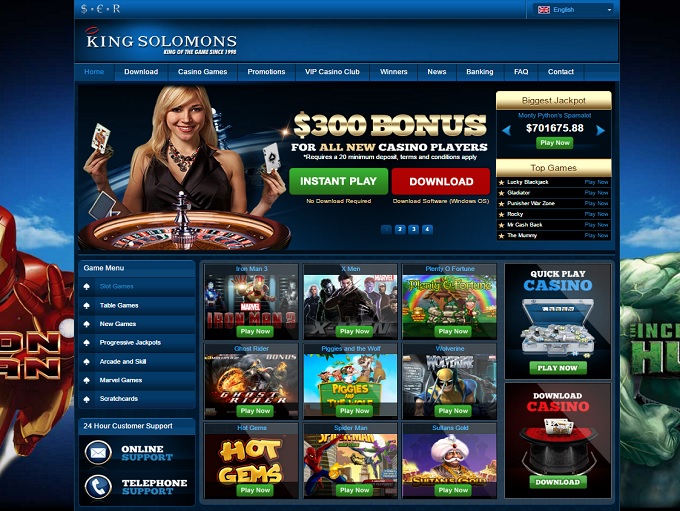 You won’t see any images at this website which will make you think about King Solomon or his mines. But the name should get you thinking about digging for gold and that’s something this casino can address. They’ve got millions in prizes available when you play any of their games, including their 60 jackpot games. In recent times, one of King Solomon’s players hit the jackpot when he was playing one of the casino’s progressive slot games, “Gladiator.” He collected more than 1,000,000.

If you become a member of King Solomons Casino, they will help you try to collect that type of payoff. They will match your first deposit with their Welcome bonus. They will give you an even bigger bonus when you make your second deposit. Once you’re a member of the casino, they will provide you with plenty of other benefits, including weekly and monthly deposit offers as well as other special rewards geared towards individual games.

King Solomons also has a VIP Club which, unlike the clubs of many other online casinos, welcomes all members. “Each player at King Solomons is as valuable as the next,” the casino says. “and deserves being rewarded for their play.”

Since the name of the casino represents everyone’s quest for rare jewels, it’s not surprising that all the levels of its VIP Club are named after rare baubles. The first three levels of the Club are Crystal, Tanzanite and Sapphire. The top three tiers are called Emerald, Ruby and Diamond. If you reach the top level, you’ll get a big VIP Welcome bonus as well as more comp points, a weekly bonus and invitations to special events.

This site uses the games of Playtech Software. That means you can play all of your favourite table and card games as well as Scratch Cards and such Arcade games as “Jackpot Bowling,” ”Penalty Shootout” and even “Heads or Tails.”

Since the creators at Playtech produce new games every week, King Solomons also has a “New Games” section. Among the recent additions to the King Solomons casino are such interesting games as “Little Britain,” “Vikingmania” and “Daring Dave and The Eye of Ra.”

King Solomons will designate one of their new offerings as their “Game of the Month.” Every time you play that game, you will be rewarded with double comp points.

Currenty there are no reviews for King Solomons Casino. Be the first one who will review it.