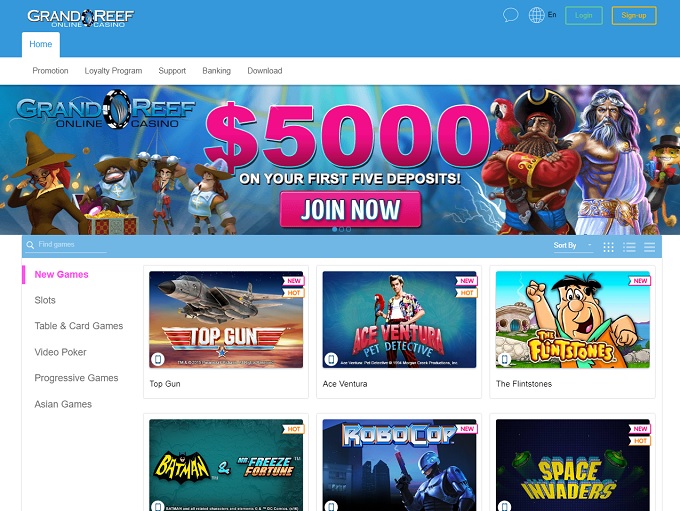 This site caters to the people of most English-speaking countries. English is the only language supported in this casino and the currencies that are accepted are limited to euros, British pounds and the dollars of Canada, New Zealand, Australia and the United States.

You can benefit from plenty of other promotions once you become a member of Grand Reef. They have frequent drawings for fabulous prizes such as electronics and exotic vacations. In addition, the casino holds monthly competitions that also offer amazing gifts.

Grand Reef has a Loyalty Program which rewards everyone who makes a wager in their casino. Every bet you make earns comp points. In keeping with the underwater theme of this site, the tiers of the Loyalty Program are referred to as Coral, Starfish, Seahorse, Turtle, Dolphin and the top level which is fittingly called Whale.

The more Loyalty Points you earn, the more benefits that Golden Reef gives to you. “As you progress up our VIP ladder,” Grand Reef says, “our casino will be offering you bigger and better promotions and rewarding you with more money to spin and win.”

This is a Playtech Casino, which means that all of its games are the product of that popular provider. There are more than 250 games you can choose from, including 24 card and table games. Grand Reef also has 14 video poker games as well as 8 scratch cards. There are also arcade games such as darts, heads or tails and rock-paper-scissors. Golden Reef also has “Asian” games, which include Pachinko and four versions of Mahjong.

This casino also has Playtech slots which feature the characters from Marvel Comics and movies. These include such games as Daredevil, Blade, Iron Man and The Incredible Hulk. All of these slots feature special bonus rounds that highlight the unique nature of each character and story.

Currenty there are no reviews for Grand Reef Casino. Be the first one who will review it.

Grab Your Ticket to the Stars in New Quickspin Title