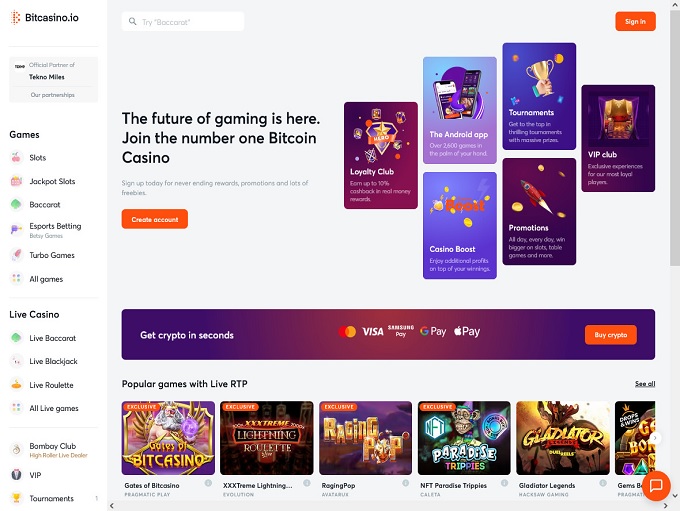 This site lives up to its name, since they only allow you to play with Bitcoins. All games are conducted with Bitcoins and all deposits and withdrawals are made with that online form of commerce.

Although the currency is a lot different than the ones used in a traditional casino, everything else about Bitcoins.io is pretty much what you will find at other online gaming sites. They’ve got plenty of games and they’ve also got a number of promotional offers. The casino supports ten languages and accepts members from virtually all countries with the exception of the US.

Bitcoins.io, which is licensed in Montenegro, also has a traditional type of Welcome offer for new members. The only difference is that it is all in Bitcoins. You can get a bonus on your first deposit of 100%. The bonus can be worth as much as 1 Bitcoin. You can get the same amount of a bonus for your second deposit, which comes with a 50% cash match. All future deposits you make at this casino will receive a 25% bonus.

Bitcoins.io also has a VIP program that rewards its members with very lavish gifts. When you quaify for the program, you and your VIP hostess will outline a program to meet your VIP goals. Among the amazing gifts VIP members receive are home entertainment centers, complete golf club sets from Callaway and an Apple Macbook Pro.

If you are in need of customer service, Bitcoins.io makes it easy to contact them by clicking on the Help button on their website. You will then be given the choice of contacting a Live Chat operator or sending an email.

This site uses the games of more than a half-dozen providers, includng BetSoft, Ezugi and Endorphina. There are more than 220 games you can play in this casino, including more than a hundred slots. There are also dozens of games that offer high limits. These include table games such as dice and blackjack but also include a number of video slots.

Among your choices in the Bitcoins.io Casino are more than 30 variations of video poker, a dozen of roulette and 17 Blackjack variations. There are plenty of other table games such as baccarat, casino hold’em and Caribbean Stud poker.

Bitcoins.io also has Live Dealers who are located throughout the world. You can play games telecast from Latin America, Europe and Asia.

Currenty there are no reviews for Bitcasino.io. Be the first one who will review it.

Bitcasino.io Casino supports banking methods for deposits and withdrawals for