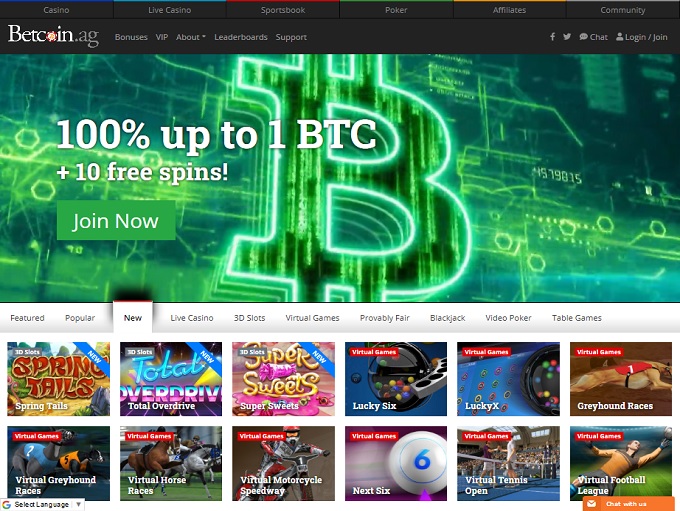 Warning: This brand does not have a gaming license.

Betcoin.ag is the main domain name which houses three other sites: BetcoinCasino.com, BetcoinPoker.com and BetcoinSports.com.  The homepage has an amazing 3D animated video that plays in the background while waiting for you to sign up. The animation is top quality but there is no real explanation of the purpose of the video. Still it’s worth checking it out to the end.

They accept US players all transactions can only be done in Bitcoins or Litecoins.

The VIP player's club is separated into seven leagues and you need to accumulate Status Points to climb the ranks; the initial ones being bronze, silver and gold. This builds up to emerald, ruby, diamond and finally Master League at 10 million Status Points.

We strongly advise against playing at Betcoin.ag two main reasons: they tend to hold jackpot winnings and they change the frequency of jackpot pay-outs. Players often complain about jackpots that they have won and not being paid to them with the casino giving the reason that certain terms and conditions have not been met, often these do not exist on the site at all. One example was that the player’s jackpot was declared null because he used a bonus spin. Only after the fact were the conditions changed to prove the casino’s non-liability.

In terms of fair play a jackpot ought to be won regularly on a statistical basis. CasinoListings.com tracked jackpot pay-outs and found that they were not playing regularly, which is highly improbable, and certain games were not even paying out all over a certain period, which suggests that they may have been programmed against the player’s favour.

Numerous complaints have been brought to the players’ arbitration authority for complaints ranging from non-payment of jackpots right to unfairly reduced jackpots. Either the problematic games may not be programmed correctly to follow the pay tables or the casino itself maliciously under pays.

An independent programmer has also found security flaws relating to JavaScript issues that prevent players from accessing withdrawal facilities. He found that the system has not been tested properly and their SSL encryption may be extremely vulnerable to hackers.

Betcoin.ag has separated their offering onto three different platforms one for casino games, one for poker tournaments and the last for sports bookings.

Live games are people who enjoy seeing a real person deal. These include Roulette, Blackjack, Keno and something you don’t see often any more, Live Lottery.

The sport betting includes the up-and-coming genre esports and even chess.

Currenty there are no reviews for Betcoin.ag Casino. Be the first one who will review it.