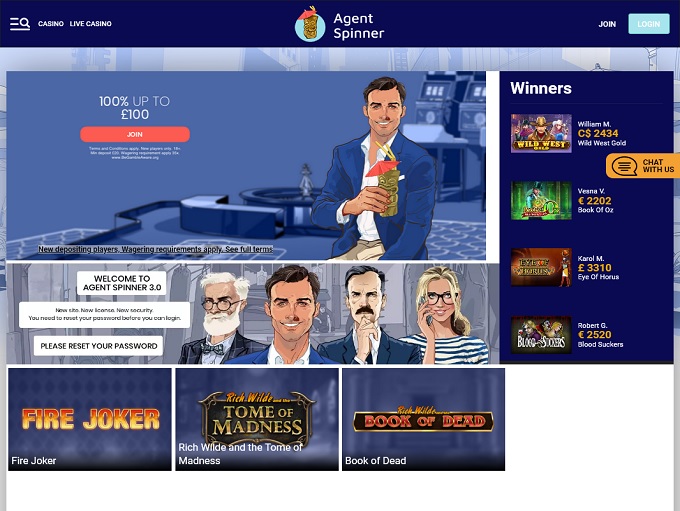 This casino really doesn’t offer too many payment methods for players to use, at least at first glance. Depositing players can pop money into their account using VISA, MasterCard, Neteller or Skrill, but although Trustly, Entercash, Euteller, Paysafecard and Zimpler deposits are also accepted. The currency of choice tends to be the euro. Players can obtain support and assistance via live chat, FAQ or e-mail at this online casino site.

Agent Spinner Casino is not exactly rolling out a production line of casino bonuses and promotions. As a matter of fact, they only really seem to offer players a welcome bonus. This welcome bonus comes in the form of a 100% match, which can see players double their very first deposit up to a total of €100. After claiming that bonus, players can also choose to claim 100 free spins on Net Entertainment’s Warlords: Crystals of Power slot machine game. The bonus cash itself can be used on over 500 slot machine games at the online casino site, although the promo bonus code of DOUBLE must be used to claim the offer.

Agent Spinner Casino actually contains software from several of the internet’s leading casino software developers. Players will find games from Quickspin, Evolution Gaming, Thunderkick, Yggdrasil, Microgaming, NextGen Gaming, WMS Gaming, and Play ‘n Go, and ELK Studios at this casino. Most of the titles carried at the site are powered by Scandinavian giant, Net Entertainment, though.

Games at Agent Spinner Casino are broken down into genres, including but not limited to recommended games, new games, live dealer casino titles, jackpot games, slot machines, video poker and table games. The latter includes roulette, blackjack, and red dog poker, and isn’t the largest selection of table games we’ve ever seen at a casino.

Currenty there are no reviews for Agent Spinner Casino. Be the first one who will review it.