770Red has a warning, we advise you play at another casino. 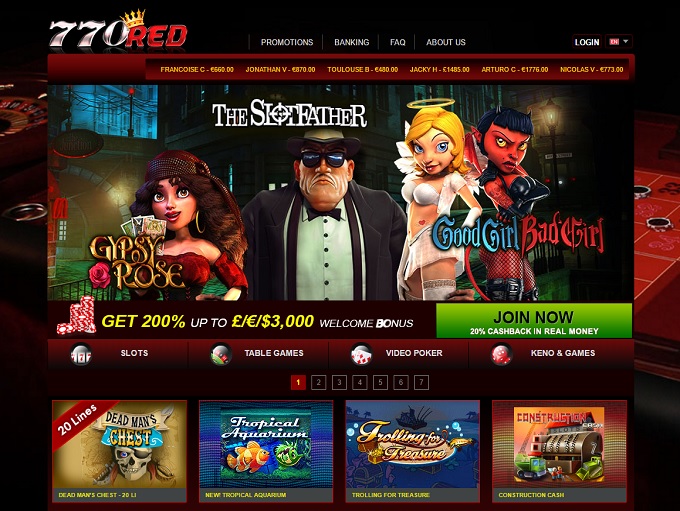 770Red Casino lives up to its namesake by having various hues of red in its website and as we all know, red is the colour of danger. As part of the 770Red Games Limited group, they hold their licence in Curacao and they their software is provided by Betsoft Gaming and Parlay Games with the former being the better developer of the two.

The first warning sign is that 770Red is not eCOGRA certified and does not have a United Kingdom Gambling Commission licence either. There is no known return to player stats for any of their slots games. They also form part of the 7Kasino group where numerous complaints have been laid amongst casinos in this faction. Primarily these complaints arise from 770Red’s terrible track record of resolving players issues, whether it be by phone or email, the casino may ignore them completely.

The Live chat somewhat of a misnomer because you are required to fill in an online form and then you are still answered by email anyway which really slows the process down.

Their clauses don’t help much either since accounts can be closed in three months by their discretion if they consider the account to be dormant and furthermore it is not explained what will happen to the funds. It is also not clear if they will attempt to let players know beforehand.

Pay outs can also be cancelled without reason and players often have to involve the regulator to get answers. Other sites have also blacklisted them because of the lack of transparency while trying to help people resolve their issues.

If you are still willing to take the chance you have the option of playing from the flash server in your browser or by downloading the software. By going online you don’t have to worry about heavy downloads but at the same time having the software installed is usually quicker. Unfortunately mobile gaming is not supported currently.

The library is not quite as extensive as at other casinos but if you visit 770Red Casino you can still enjoy multi-hand blackjack and over a dozen variations of video poker such as All American, Deuces Wild, Caribbean Poker, Pai Gow and Joker Poker. Classics like keno and roulette are available too and it’s always a bonus when you are not forced to play with the double zeros on the wheels. The slots are pretty limited and keep you entertained the nonetheless.

Currenty there are no reviews for 770Red. Be the first one who will review it.

770Red Casino supports banking methods for deposits and withdrawals for