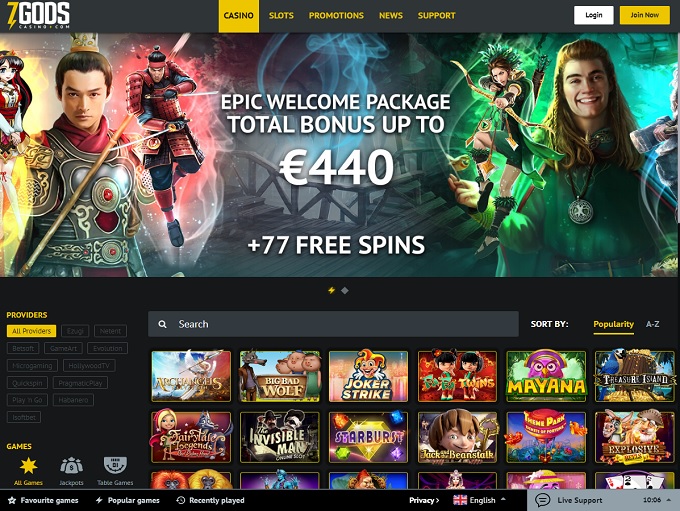 7 Gods Casino is one of the most restricted online casinos on the net. They only accept players from a handful of countries and made their debut in the casino world just this year (2018). The online casino is owned and operated by Gammix Limited and licensed out of both Malta and Curacao. Gameplay is available in English, Finnish, German, Norwegian, Russian and Swedish and a handful of different currencies can be used to play at this instant play and mobile casino site.

Players can choose to deposit using US dollars, British pounds sterling, euros, Norwegian kroner, Swedish kronor and New Zealand dollars at this domain, with payment methods which include bank transfers, EcoPayz, MasterCard, Neteller, Paysafecard, Skrill, Trustly, VISA, Zimpler and a few others. The casino notably offers customer support via live chat and e-mail, with an FAQ available for simpler queries.

New players who choose to sign up and play over at 7 Gods Casino will be able to claim a 100% match deposit bonus on the very first deposit they make. This offer is not only valid up to £100, but it also comes with free spins on top slot machines at the casino, which can be used to win real money.

Other bonuses and promos and somewhat few and far between at this casino, but players can pocket further deposit deals. Additional bonuses are available on new players’ second, third and fourth deposits, with matches of 50%. 50% and 70% worth up to £100, another £100 and £140, respectively. A loyalty bonus program can also see players pocket points for their bets which over time can be used to claim real money for use on games at the casino.

7 Gods Casino features software from leading developers such as BetSoft Gaming, Evolution Gaming, Ezugi, GameArt, Habanero, iSoftBet, Microgaming, Net Entertainment, and Play ‘n Go, Pragmatic Play and Quickspin, so players won’t be short of something to play. Those games include table games such as baccarat, blackjack and roulette, as well as video poker, table poker games, live dealer casino games from Ezugi, and of course, plenty of online slot machines.

Some of the more impressive slot machine games you can expect to find at 7 Gods Casino include Archangels, Asgardian Stones, Twin Spin Deluxe, Lost Relics, Hotline, Starburst, Book of Dead, Planet of the Apes, Moon Princess, Jack and the Beanstalk, and Fairytale Legends: Red Riding Hood.

Currenty there are no reviews for 7 Gods Casino. Be the first one who will review it.