4Grinz Casino has a warning, we advise you play at another casino. 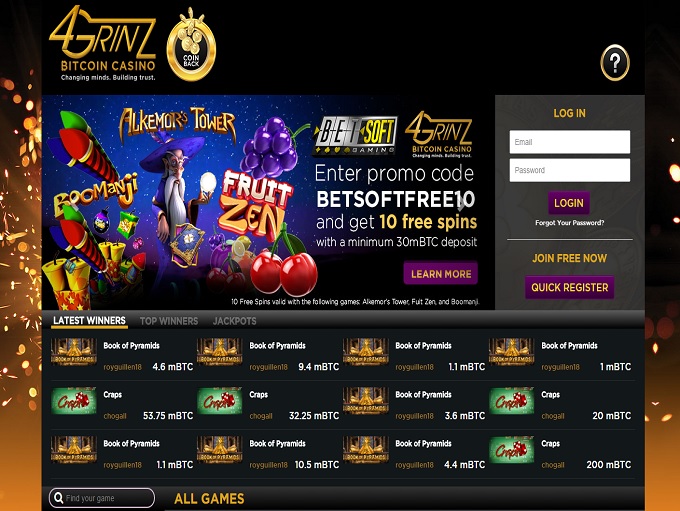 4Grinz Casino is a bitcoin online casino site, and it is one which has been mentioned in a bad light of late. The online casino is powered by the respectable BetSoft Gaming, although there have been several issues regarding delayed payments.

4Grinz Casino launched last year, and is licensed out of Curacao. Sometimes a license just isn’t enough to convince players, though, and with good reason. This casino fails to offer players any welcome bonuses, and it doesn’t accept players based in the USA, even though most other bitcoin casinos do.

This online casino only offers support live chat (although that itself is more than most other bitcoin sites). They are a part of the Coin Gaming.io group, and players must use the English language and bitcoin currency when playing at this casino site.

Mobile gaming is made possible at 4Grinz Casino, although players can also try their hand at instant play casino games via the flash casino site. As we’ve said, there are a few niggly bits concerning this casino’s terms and conditions. You can read more about that at various casino review sites, who don’t tend to give 4Grinz a favourable review.

Once again, bonuses are not currently offered at 4Grinz, although they tend to come and go. There have been welcome bonuses and reload bonuses in the past, but then they seem to be withdrawn without notice, and it can be months before any similar deals come online. This can be troubling if you’re the type of casino player who loves big bonuses and regular promotions.

There doesn’t appear to be any complaints about fair play in terms of the games offered at the casino. 4Grinz Casino is powered by BetSoft Gaming, but you can also find games from several leading developers there, including Endorphina, GameArt, and Play ‘n Go, as well as smaller-scale developers such as Booming Games, and Takisto.

The hottest slot machine games you can currently find at 4Grinz Casino include 2 Million B.C., A Night in Paris, Arrival, At the Copa, Barbary Coast, Dr Jekyll and Mr Hyde, Fruit Zen, Greedy Goblins, It Came from Venus, Lost, Mamma Mia, Mr Vegas, Ned and his Friends, Once Upon a Time, Rockstar, Slots Angels, The Exterminator, Tycoons Plus, WhoSpunIt, and Wild Texas. It is worth noting that several customers have complained that when playing 4Grinz Casino’s online slots, the minimum bet tends to be rather costly, due to the use of bitcoins.

Hi there. This is Sandy at 4Grinz Bitcoin Casino. I'd like to assure anyone visiting this site that we have not been reviewed or consulted by freecasinogames.net and the information above is not correct. Our platform provider is SoftSwiss. We are not powered by Betsoft Gaming and 4Grinz prides itself on paying all cashout requests immediately. No one leaves our casino empty-handed. Players either win or get at least 10% back guaranteed. See you at the games!