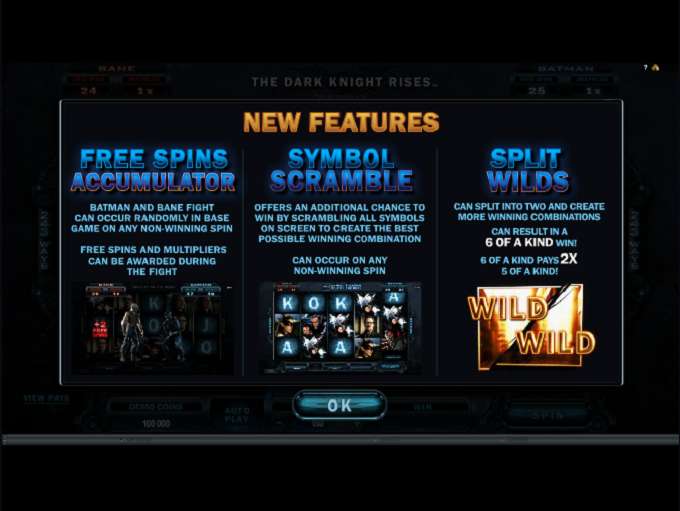 Game has been discontinued by the manufacturer and is no longer available.
Please see other games from the same category.

About The Dark Knight Rises

This DC Comics and Warner Brothers slot game, developed by Microgaming, was much anticipated following the past success of its predecessor “The Dark Knight.” This game features some of the figures and themes from the previous game, but like the movie it is based on, The Dark Knight Rises Slots has a new cast of characters who also appear. The graphics and audio for The Dark Knight Rises are of the highest quality. The music is dramatic and creates an air of tension.

The Dark Knight Rises has five reels and offers 243 different ways to win. There is a special 'Split Wild” offered in this game, so the best possible spin is not five-of-a-kind but six-of-a-kind.

The Dark Knight Rises Slots has several unique features. These include “Expanding Wilds” which can make an entire reel turn wild. Another unusual aspect of the game is the “Symbol Scramble” which rearranges the icons on the game board in order to create the best possible payoffs.

Another random feature in the game is a fight between  Batman and Bane. After any losing spin, these two characters can appear in front of the board to engage in combat. Their fight creates and accumulates extra free spins and multipliers for the bonus round.

As with many slot games, the best way to collect a bunch of coins in The Dark Knight Rises is to win free spins. When the scatter symbol-which looks quite a bit like the Batman symbol-appears on three lines, you'll be given ten free spins. You'll then have the choice of taking either Batman or Bane's side in the free spins. Each side has some special ways of improving your chances of winning.

The Dark Knight Rises free spins are certainly unique since they let you choose among several different features. You can select “Stacked Wilds” which increase your chance of getting a big payoff. by covering one or more reels. There are also “Rolling Reels” which can drop and move symbols to create better payoffs.

The free spins also feature “Heat-Seeking Wilds” which will appear randomly during the spins. A jet fighter comes into view and fires a weapon into a symbol to turn it into a Wild. There is one more special bonus game feature called a “Wild Blast.” which will also create extra Wilds during the free spins.