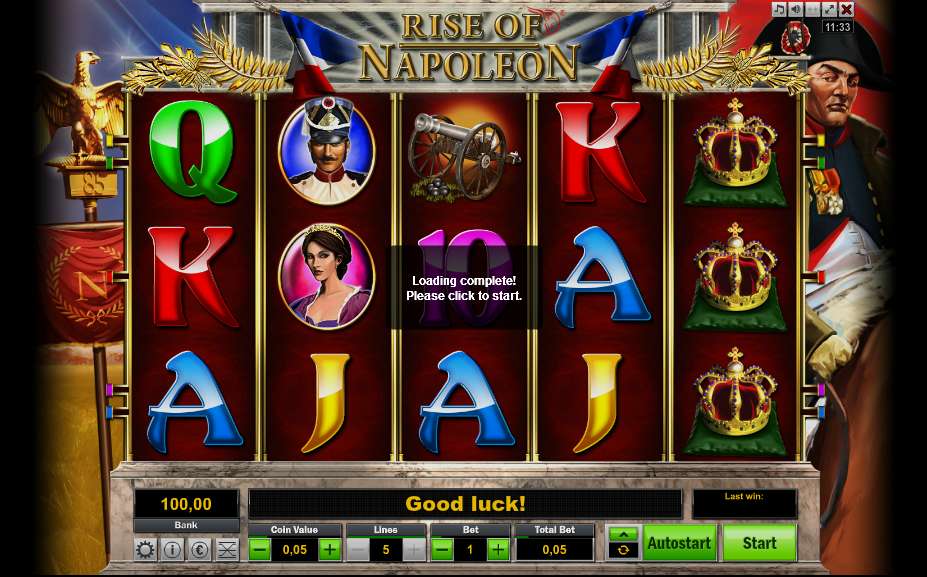 About Rise of Napoleon

The Rise of Napoleon video slot is a historical title. Some of it is rather silly. For instance, the Roman standard with the letter “N” on it – what’s all that about? It may not exactly be historically accurate, but there is still something likeable about this title, for those who love war themed video slots. Rise of Napoleon is developed by KGR Entertainment, who are one of the smaller online casino software developers. You can win up to 8,000 coins in this slot, by landing 5 of the Napoleon icons on any active payline. Wagers cost very little, with minimum and maximum stakes setting you back just 0.05 and 50.00, respectively. You probably should know though, that the Rise Napoleon video slot only contains 5 paylines sitting upon its 5 reels. That makes it quite primitive in relation to modern day video slots.

There is a wild icon in this game, and that icon is the diminutive little dictator himself. Napoleon can substitute himself for all other icons in the game, except for the scatter icon. The wild can also expand to cover an entire reel during the free games bonus. Players will need to line up five wilds to win the non-progressive jackpot.

The scatter icon in this game is the aforementioned “N” icon. When this icon appears just two times or more, players will win free spins in this slot. They can also pick up 1x, 2x, 10x and 50x their total bet by landing 2, 3, 4 or 5 of these scatters anywhere on the reels. For the same number of scatters, players can enjoy 10 15, 30 or 50 free spins.

Rise of Napoleon also has a gamble feature included in this title. After any winning combination has occurred, players can opt to gamble their winnings. They must choose whether the next card will be a red, black or a specific suit. Players can double their money by correctly guessing the colour of the next card, or quadruple it by correctly guessing the suit. If they guess wrong, they lose their winnings. The odds aren’t high on you succeeding with this gamble feature.

There are no multipliers in this free spins bonus feature. There are however, expanding wilds, as we have mentioned. One good thing about the free spins bonus in the Rise of Napoleon video slot is that you only need to bonus icons in order to trigger it. That is pretty handy!

Currenty there are no reviews for Rise of Napoleon. Be the first one who will review it.