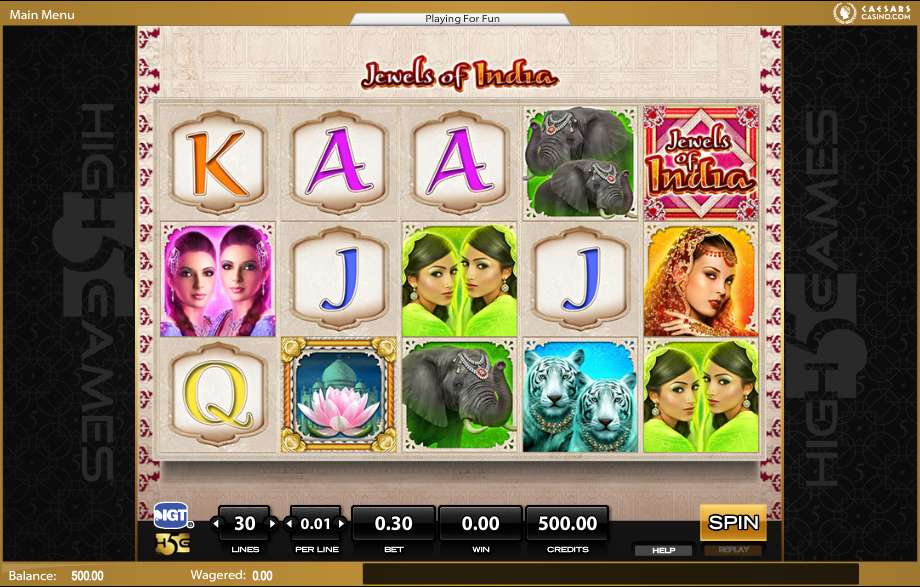 About Jewels of India

Jewels of India is a culture themed video slot, and one which has been created by leading software developer, IGT. This video slot is played over 5 reels as is to be expected, and players can wager on up to a total of 30 paylines. Graphically, the slot is pretty decent, with a lot of Elephants, tigers and ladies all present on the reels. The slot will permit players to choose coin denominations of 0.01 up to 10.00, but you can only wager 1 coin per line. All paylines are adjustable in Jewels of India, giving the player minimum and maximum wagers of 0.01 per line, per spin, and 300.00 per spin, respectively.

Jewels of India uses its own title logo as a wild icon. The wild symbol is responsible not just for replacing other icons, but also for handing out the non-progressive jackpot of 10,000 coins, if 5 are struck on any active payline. As a wild, it can be a substitute symbol as we’ve said, and it can sub itself for all other icons. When wilds replace either the lady, tiger or elephant icons, all wins will be doubled.

The video slot uses a plant as its scatter icon. Any 4 of them appearing on the reels will double your total bet and return it as winnings to you. Each scatter contains either one or two flowers. Those which have two count as two scatters. In fact, all of the symbols in this slot can be doubled if two images appear on the same icon.

In the free spins bonus game, players will pocket considerably larger wins than they can do in the standard base game. It is also worth mentioning that during this game’s bonus, you can win big money by lining up 10 of a kind on the reels, simply by pocketing 5 double icons on a payline.

Currenty there are no reviews for Jewels of India. Be the first one who will review it.