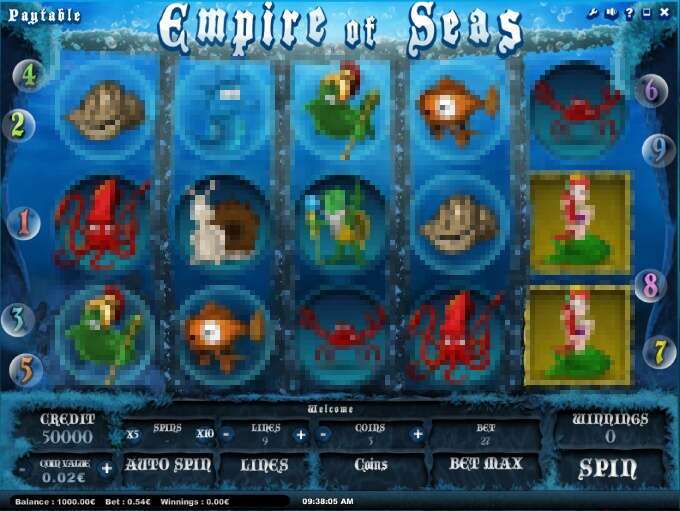 Empire Of The Seas Slot Review

About Empire Of The SeasSlot

Brought to the screens of our computers from the iSoftBet software platform, Empire of The seas is obviously an underwater themed video slot. It offers five reels and nine pay-lines, as well as a massive 15 000 coin maximum prize. This is a non-progressive game, but is well worth taking a spin of the reels because of the size of the top prize. We already know that the bottom of the ocean is hiding tons of sunken treasure, so, why not try to get your hands on a little sunken treasure of your own?

We also found a bet coin range of 0.02 to 2.00 over a maximum bet of 27 coins. This is means that players don’t have to dig too deep into their bankrolls, and it is not really a high-rollers game.

There are some lovely features in this online video slot. The graphics are cute, comic and endearing, with a green dolphin whose status is no doubt enhanced by the fact that he wears a golden Roman Soldiers helm. Find the bonus feature unlocked by revealing a sunken treasure chest, and all kinds of denizens of the deep - icons such as fish, sea-horses, shells, crabs, octopus, a sea-turtle, and King Neptune, as well as a little Mermaid, whom we presume is his daughter. The number “7” also features, and an anchor is the wild icon, while the scatter is none other than a message in a bottle.

The scatter offers multipliers on and initial wager of between x 1 and x 25, while the wild icon can multiply wins by both 2 and 4 times.

There is very little strategy required for playing any kind of slots game either online or off, except perhaps for money management to get the most entertainment value out of the game. This is a simple slot to understand choose a bet size, select pay-lines and play.

The aim of the game in playing Empire of the Seas is to get to the bonus round, as this is where the most winnings can be found. Land three or more sunken treasure chests on the right pay-line, and the Oyster Bonus Feature will play. This is a very simple bonus feature also, where a number of oyster shells are very obviously hiding the potential for a generous win. Get lucky enough and you the world may turn out to be your oyster too.

Currenty there are no reviews for Empire of Seas. Be the first one who will review it.