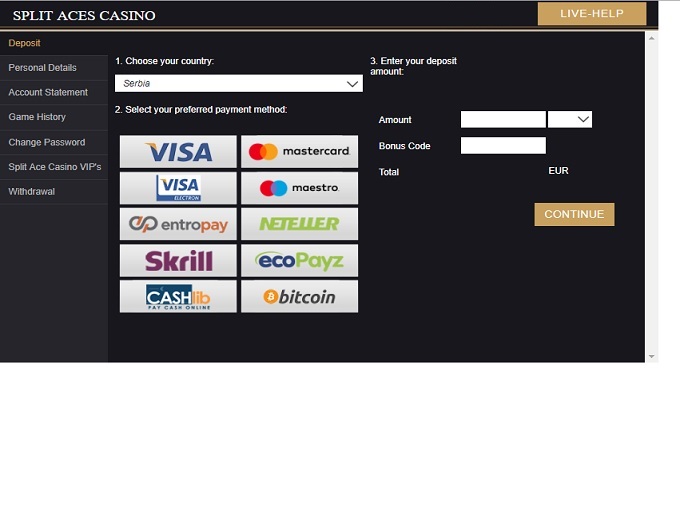 Split Aces Casino debuted in 2018 and is owned and operated by Alpha Interactive Solutions. This Curacao licensed online casino can offer mobile and instant play casino gaming, just like you would expect of any new site. With gameplay available in a variety of languages, not mention currencies, it is not surprising that they can offer gameplay to players across the globe.

This is an online casino which likes to offer choice to its players, therefore, it shouldn’t come as a surprise to see that Split Aces Casino offers many deposit methods, some of which include Neteller, Trustly, Sofort, EcoPayz, Bitcoin, VISA, Paysafecard, MasterCard and Skrill. Support is available via telephone, live chat and e-mail.

A new player who chooses to make Split Aces Casino there home for casino gaming can claim a first deposit bonus which is worth a 200% match. Offered on the maiden deposit a new player makes, as much as €1,000 can be claimed with this offer, which comes with 20 free spins to boot on top slots carried at the online casino site.

Instead of that welcome bonus offer, players at Split Aces Casino can also pocket an Insurance Bonus when playing. This offer is provided by the live chat option at the site, and it is offered if players did not choose to claim a deposit bonus. It comes with rather hefty 50x wagering requirements, though, and that does tend to put players off claiming the deal.

Split Aces Casino is a new site, so like many of their counterparts, they feature software from many different developers. Those developers include the likes of BetSoft Gaming, Booming Games, Booongo, Extreme Live Gaming, Fugaso, Mr Slotty, Net Entertainment, NextGen Gaming, and Play ‘n Go, Playson and Scientific Games.

Like many other casinos, the games are Split Aces Casino are divided up into smaller, more manageable sections. You can expect to find games at this casino which include baccarat, blackjack, keno, live dealer casino games, roulette, slot machines, table games, and video poker.

Players hoping for top slots will be able to get to grips with some epic games at the site. These include the likes of Golden Shot, Hugo Goal, The Mummy 2018 Block Pays, Football: Champions Cup, Lilith Passion, Claws vs. Paws, Goal, Planet Rocks, Number One, Horror Castle and Sevens & Fruits.

Currenty there are no reviews for Split Aces Casino. Be the first one who will review it.