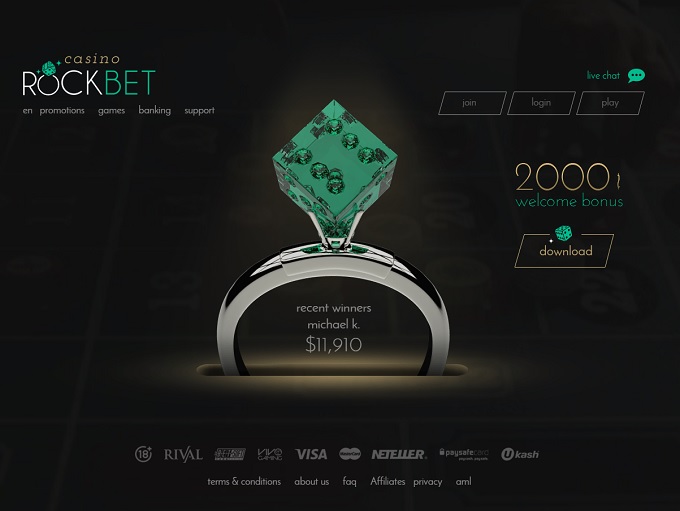 At first glance, Rockbet Casino looks like it is one of the more professional online casinos on the net. Believe it or not, though, they actually have something of a bad reputation in the online casino world right now. Rockbet Casino is a mobile, instant play and downloadable casino site, and on which has been active since 2009.

The casino offers VISA, MasterCard, Neteller, Paysafecard, and Upaycard deposit options, and like many casinos which tend to gather complaints, they are powered by Rival Gaming. That isn’t to say Rival Gaming are at fault (they merely provide games). Rival Gaming are usually cheaper to use than many other major casino software providers. Although in this case, there are numerous complaints about Rival’s action (Rival has threatened to sue Casinomeister), which doesn’t exactly portray them in the best light.

Rockbet Casino offer gaming in a variety of languages, and accept a number of different currencies at their domain. Players will be able to obtain customer support via telephone (not exactly toll-free), live chat or e-mail. The casino itself is licensed out of Curacao.

After signing up as a newbie at Rockbet Casino, you can claim a 400% match deposit welcome bonus, and one which is valid up to €2,000 in total. Players will also be able to claim a 100% cashback offer for table games, and join a loyalty bonus program which can see them able to claim casino comp points.

According to reports, Rockbet Casino has been blacklisted due to “unethical business practices”. This may come down to the fact they are run by the BestPay Partners group, which has also had issues at their other casinos, including Rome Casino (which has now been closed). Such issues have involved non-payment to players, most notably after the casino changed the terms and conditions after a big to win to avoid paying out. Such practices cannot be tolerated.

Rival Gaming are again behind this casino, which once more has a dodgy track record. This seems to happen a lot to Rival Gaming. Games at the casino include baccarat, bingo, blackjack, craps, keno, ride ‘em poker, Pai Gow poker, red dog poker, roulette, table poker, and video poker.

Currenty there are no reviews for Rockbet. Be the first one who will review it.

Rockbet Casino supports banking methods for deposits and withdrawals for