Playmillion Casino has a warning, we advise you play at another casino. 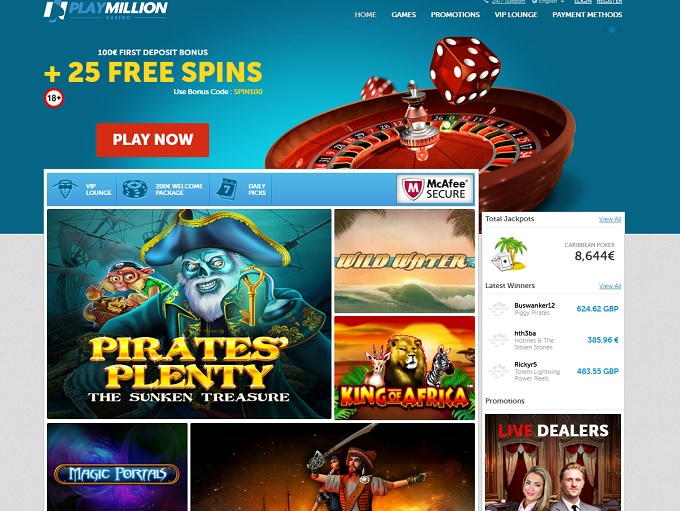 This is, in many ways, one of the biggest online casinos. It supports an amazing 29 languages, including virtually every one that is spoken in Europe. It also accepts eleven different currencies from countries on four different continents. The casino also offers more than thirty ways to make a deposit.

Play Million also has some of the biggest promotions that you’re likely to find anywhere on the internet, including their Welcome bonus which can put thousands of extra chips into your account. Once you’ve joined the site, you can take part in the casino’s monthly races which award special prizes to the members who end up at the top of the Leaderboards. Play Million also has many more offers which are listed on their “Promotion Calendar.” They include reload bonuses, Happy Hours and comp point bonuses.

Play Million also has a VIP Lounge which they call the “Millionaire’s Club.” It has six levels, beginning with Bronze, Silver and Gold and continuing up to Platinum, Diamond and the top level, “Red Diamond.”

While many VIP programs offer a confusing list of rewards, Play Million concentrates their Club benefits to just three items They offer increased cashback, invitations to exclusive events and what they describe as “exceptionally high bonus offers.” Play Million also provides all their VIP members with a Personal Account Manager.

Play Million offers the games of several different software developers, including SkillOnNet, Amaya and NYX Gaming. The casino offers multiple choices of all of your favourite games, including twelve versions of Roulette. There are also six versions of Blackjack you can play as well as three tables offering Baccarat. Play Million also has such other card games as Pai Gow Poker and Casino War. There are also twelve Scratch Cards you can play.

The many slot games offered by Play Million are listed in three categories: 3-reels, 5-reels and “Jackpot Slots.” There are seven of the Jackpot games available, including “Millionaire Genie,” a game developed by SkillOnNet. Unlike most progressive slots, it has only three reels and three paylines. but it often offers payoffs in the hundreds of thousands.

Many of the other progressive slots offered by Play Million are based upon famous movies. These include “Forrest Gump,” a slot game developed by Cryptologic. It has 5-reels and 25 pay lines and it includes several bonus features in addition to its progressive jackpot.