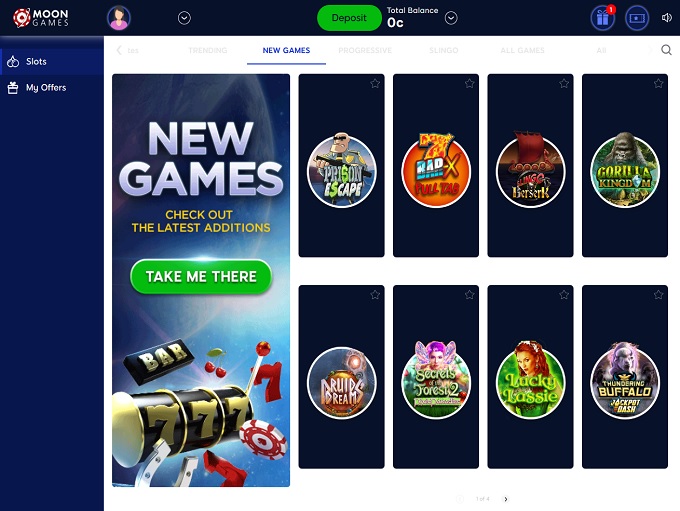 “Life’s a game. Play it,” is the friendly and encouraging slogan of this new and colourful online gaming site. “We love you as much as you love playing” is another of their greetings. Just in case you didn’t know that you can make wagers at Moon Games, they spell their name with a casino chip in place of the second O.

Moon Games is licensed in Gibraltar and offers hundreds of games in their casino. There are two languages supported-English and Swedish, though the Swedish currency is not accepted. Moon Games lets you play with British pounds, US dollars, Canadian dollars and euros.

In keeping with its space theme, Moon Games claims that their Welcome offer is “Out of this world.” They will give you 500.00 in bonuses for each of your first three deposits. Your first deposit receives a 100% cash match, while your second and third each get 50% bonuses.

Once you begin to play at Moon Games, you can take part in one of the internet’s most exciting Loyalty and VIP programs. You’ll earn “Moonchips” for all of your wagers. You’ll also get chips if you follow Moon Games on social media.

Your Moonchips will also reward you in the Moon Games VIP program. In keeping with the space theme, you begin in the VIP Club as a Cosmic player, advance to Galactic status and become a Supernova when you reach the top tier.

The higher your status, the more you can get with your VIP points. You’ll get invitations to VIP tournaments and cashback on all of your wagers. You’ll also get the chance to spend your Moonchips on the luxurious items in the Moon Games Gift Shop.

Moon Games uses several software providers for their games, including NetEnt, NextGen and IGT Interactive.This site has more than 200 games to choose from, including scratch cards, blackjack and multiple versions of keno. Moon Games also has a Live Dealer Casino that features roulette.

Moon Games also has dozens and dozens of slots to choose from, including several with progressive jackpots. Those games include such popular titles as Millionaire Genie and A Nightmare on Elm Street, which are both the creations of 888 Software, and Fluffy Favourites, which was developed by Eyecon. The casino also has two progressive slots that were developed by Playtech-Irish Luck and Temple of Isis.

Currenty there are no reviews for Moon Games. Be the first one who will review it.